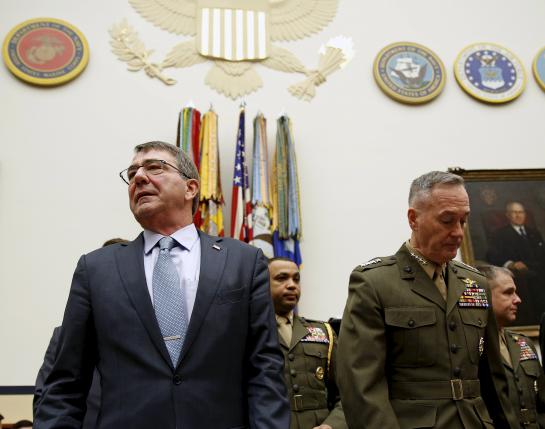 The United States said on Tuesday it was deploying a new force of special operations troops to Iraq to conduct raids against Islamic State there and in neighboring Syria, in a ratcheting up of Washington’s campaign against the group.

U.S. Defense Secretary Ash Carter said the deployment of the new “specialized expeditionary targeting force” was being carried out in coordination with Iraq’s government and would aid Iraqi government security forces and Kurdish peshmerga forces.

“This force will also be in a position to conduct unilateral operations into Syria.”

Abadi reiterated that foreign ground combat troops were not needed in Iraq, although it was unclear whether Baghdad viewed these special operations forces in that role.

Powerful Iraqi Shi’ite Muslim armed groups pledged to fight any such deployment of U.S. forces to the country.

Jafaar Hussaini, a spokesman for Kata’ib Hezbollah, one of the main Shi’ite militant groups, said that any such U.S. force would become a “primary target for our group.”

“We fought them before and we are ready to resume fighting,” he said.

U.S. officials, speaking on condition of anonymity, said the plan to deploy the special operations forces unit to Iraq was discussed and agreed with the government of Iraq before Carter’s announcement.

“As we further develop plans for these limited forces, we will continue to work closely with our Iraqi partners on where they will be deployed, what kind of missions they will undertake, and how they will support Iraqi efforts,” one U.S. official said.

While the force is expected to number only about 200, its creation marks the latest stepping up of U.S. military pressure on Islamic State while also exposing American forces to greater risk, something President Barack Obama has done only sparingly.

The force is separate from a previously announced deployment of up to 50 U.S. special operations troops in Syria to coordinate on the ground with U.S.-backed rebels fighting in a civil war raging since 2011.

Obama is under pressure to accelerate a U.S.-led coalition’s efforts to combat Islamic State, in particular after the Nov. 13 Paris attacks that killed 130 people. He has been reluctant to commit large numbers of U.S. ground troops, instead deploying limited numbers of advisors and elite forces.

Fred Hof, formerly a top State Department adviser on Syria, said the planned deployment of special forces to Iraq to conduct raids and gather intelligence represented a shift by Obama.

Hof, who is now at the Atlantic Council think-tank, said the U.S. special forces were filling a gap in capable ground forces to fight Islamic State, which won control of Iraq’s Anbar provincial capital of Ramadi in May and also controls the northern of Mosul.

Obama “is edging as closely as he can to try to fill this … gap without violating in a technical sense his own ‘boots on the ground’ dictum,” Hof said, referring to Obama’s frequent pledges not to return to U.S. troops to a large-scale ground war.

That pledge, he said, does not appear to apply to U.S. special operations forces. Obama in August 2014 authorized the first U.S. air strikes in Iraq since the 2011 U.S. troop withdrawal and has deployed more than 3,000 American military forces to train and advise Iraqi and Kurdish forces to fight Islamic State.

His critics, including Republicans in Congress, accuse Obama of moving too slowly against Islamic State, which controls large swathes of territory in Iraq and Syria and claimed responsibility for the Paris attacks.

Carter offered few details on the new group, whose mission promises a more regular operational role for U.S. special forces than seen since the return of American troops to Iraq last year.

During the congressional testimony in which he disclosed the creation of the force, Carter declined to say how many U.S. troops would be deployed.

One U.S. official, speaking on condition of anonymity, said the force may number around 200 troops including support personnel, with only several dozen likely to conduct operations.

The top U.S. military officer, Marine Corps General Joseph Dunford, said the new force would greatly accelerate the collection of intelligence, which “will make our operations much more effective.”

“We’re fighting a campaign across Iraq and Syria so we’re going to go where the enemy is, and we’re going to conduct operations where they most effectively degrade the capabilities of the enemy,” Dunford testified.

Google's Nexus 5 2nd generation could be available to buy in...