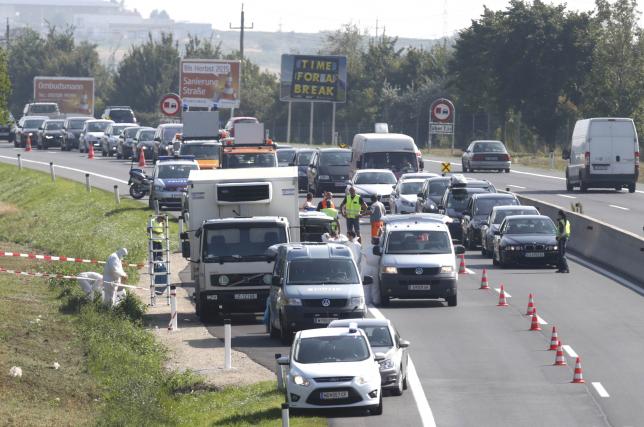 As many as 50 corpses were found in a parked truck in Austria on Thursday, and another migrant boat sank off Libya, deepening a crisis that is overwhelming Europe and throwing up new tragedies by the day.

The abandoned refrigerated truck was found by an Austrian motorway patrol near the Hungarian border, with fluids from the decomposing bodies seeping from its back door.

“One can maybe assume that the deaths occurred one-and-a-half to two days ago,” Hans Peter Doskozil, police chief in the province of Burgenland, told a news conference, adding that “many things” indicated the migrants were already dead when the truck crossed the border.

Police said it could take until Friday to determine the exact number of victims, which they thought were more than 20 and could be as many as 50. They suspected those responsible were already out of the country.

German Chancellor Angela Merkel said at a summit on the West Balkans in Vienna: “We are of course all shaken by the appalling news. This reminds us that we must tackle quickly the issue of immigration and in a European spirit – that means in a spirit of solidarity – and find solutions.”

A security official in the Libyan city of Zuwara said several hundred people had been on board a boat that sank off the coast on Thursday. Some appeared to have been trapped in the hold when it capsized.

“Some 100 illegal migrants have survived,” the official said, adding that rescue operations were continuing. Those on board had been from sub-Saharan Africa, Pakistan, Syria, Morocco and Bangladesh, he added.

Even before the latest incidents, the International Organization for Migration estimated 2,373 people had died so far this year while trying to reach Europe by sea, and 3,573 in the past 12 months.

On Thursday, the Swedish coastguard ship Poseidon arrived at the port of Palermo on the Italian island of Sicily with 52 corpses found on a boat off the coast of Libya on Wednesday. Most of the victims had been trapped in the hold and died of asphyxiation, according to survivors.

Poseidon disembarked 471 migrants who were among the more than 3,000 rescued by several ships on Wednesday.

“There are thousands and thousands of dead lying in the Mediterranean whose bodies will never be found, and no one is paying attention,” said Palermo’s Mayor Leoluca Orlando.

Hundreds of thousands, many fleeing war in countries such as Syria and Libya, have made it into the European Union. Germany alone expects 800,000 asylum-seekers this year; Hungary is building a barbed wire fence along its border with Serbia.

Investigations were launched in Austria and Hungary after the bodies in the truck were discovered. The truck had Hungarian number plates, a Hungarian official said.

Helmut Marban, press officer for Burgenland police, said a highway patrol had spotted the truck and at first thought it was damaged or had been in an accident.

“When they checked they found it had no driver and blood was dripping out of the vehicle and there was a smell of dead bodies,” he said.

The truck was towed to the Austrian village of Nickelsdorf, close to the Hungarian border, where workers clad in white protective suits and yellow boots could be seen wheeling body bags into a building.

Police said forensic experts would work through the night before the bodies would be transported to Vienna on Friday for further examination and to help establish their identities and cause of death.

“I see a good chance that we can catch the perpetrators.”

Austrian Chancellor Werner Faymann told the summit in Vienna: “The refugees who died today wanted to save their own lives by fleeing, but instead lost their lives at the hands of traffickers.”

EU foreign policy chief Federica Mogherini said she hoped the tragedy would push member states to “take decisions and responsibility”. European Commissioner Johannes Hahn reiterated that Brussels would propose within weeks a fresh look at the situation, with a view to sharing responsibility between countries.

“We will have another go at quotas. I hope that in the light of the most recent developments now there is a readiness among all the 28 (EU member states) to agree on this,” he said.

Serbian Foreign Minister Ivica Dacic put the onus on EU countries to find a better way to handle the influx of refugees.