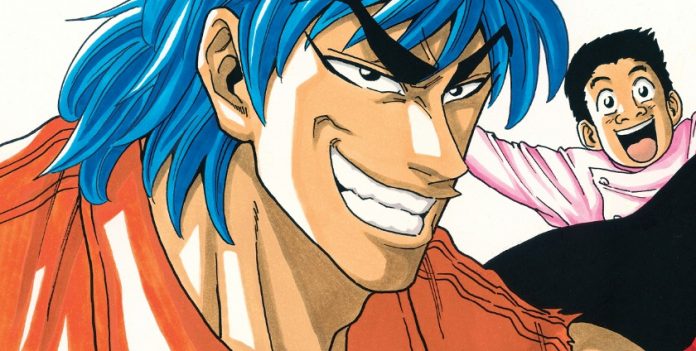 The God story arc of Mitsutoshi Shimabukuro’s gourmet manga serial “Toriko” has released chapter 387 dubbed “A Reunion With Appetite.” The chapter was filled with revelations and cliffhanger scenes from which most of the fans speculate that the current arc will be ending soon.

Released a couple of days ago, the abovementioned chapter featured a badly beaten Starjun after he was chopped into half by the beast Acacia. Midora then came to his aid and gave their demonic antagonist a powerful wallop that flung Acacia halfway across the globe. However, the said move cost the former his left arm and attempted to regenerate it using the so-called “Minority World” but to no avail.

Meanwhile, Toriko made an effort in at least salvaging Starjun’s remaining life force but the latter insisted and told the former that he already got what he came for. Furthermore, Starjun further explained Toriko’s connection with Froese, Acacia, and with him, that gave the gourmet hunter the shock of his life upon knowing that they are brothers.

Acacia, on the other hand, quickly made it back to the fray and just as when he was about to deliver the finishing blow upon Toriko, ethereal beings went out from Starjun’s fatally wounded body carrying Toriko away from the battlefield.

Toriko was then met by Ogre who is the former’s appetite demon. The latter explained that it was Toriko’s previously eaten meals that made him come into being and as a form of gratitude, the demon then went inside Toriko and made him powerful than ever.

As the plot is about to reach its tipping point, fans speculate that Toriko will eventually beat Acacia to a pulp with the possibility of saving his dying kin in the upcoming chapter 388, titled “Main Dish.” Moreover, there are also talks about Acacia’s own appetite demon known as Neo who will be coming to his aid making him an equalizer against Toriko’s newfound strength.