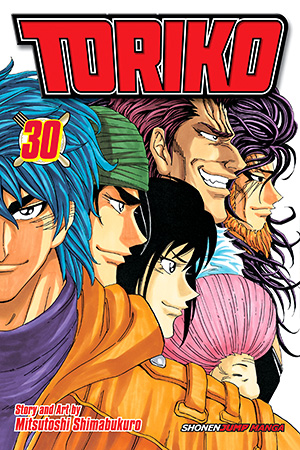 The previous chapter has shown that Acacia’s capture level is 8,000, while Neo’s is 22,000. They may look grotesque once they are fused together, but if they do, their capture level rises up to a staggering 30,000. Can Toriko and Midora find a way to defeat the combination of Acacia and Neo now that Starjun is out of the picture?

Acacia bit Starjun in half during the final page of the previous chapter, so he’s probably as good as dead, right? Apparently, he may survive according to several sources. It is possible that someone may bring him some cure water so that it can repair the damages his body has received. But will it work on Starjun? Being cut in half does look fatal no matter how potent cure water is.

If Starjun does die, Toriko may have a short time to grieve. Reports are saying that he may tell Toriko the identity of their parents. His death may also trigger the release of the third demon inside Toriko. If Toriko’s third demon does appear, fans are saying that its capture level may match Neo’s once he eats the divine ingredient, GOD. There is even a rumor suggesting that Toriko may eat Starjun so he can defeat Acacia. Now, that will be a sight to remember.

Meanwhile, now that the Eight Beast Kings have had time to recuperate, sources believe that they may be ready to make a comeback and help Toriko and Midora in chapter 387. While Acacia has proven that he is more than a match against the Beast Kings, fans believe that there is a possibility of them fusing together so that they can be on par with Acacia and Neo’s capture level. However, if they don’t do this, they may be left sitting on the sidelines once again.