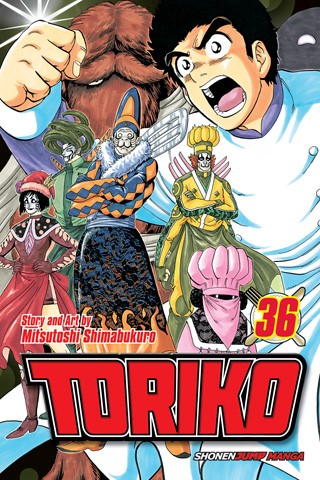 Toriko’s quest to search the world for food and ingredients to complete the ultimate dinner course continues in “Toriko” chapter 383.

The previous chapters had shown readers just how powerful Acacia could be as he stopped the Eight Kings. They were the eight most powerful beasts in the world, but they were no match against the might of Acacia. After their attempted attack, the Eights Kings are now down to four  or five since Derous’ status is unclear. Only Guinness (despite losing a foot) and Sky Deer are capable of fighting.

It is believed that in the upcoming chapter, Toriko may team up with Midora and the remaining Beast Kings to take on Acacia, but can their combined efforts defeat a foe as powerful as Acacia? Keep in mind that Acacia has not revealed his final form yet.

Midora will have to fight at 100 percent by eating the Full Course, but even then, it is hard to imagine anyone defeating Acacia right now. Perhaps the key to beating Acacia is to wait until he separates from Neo.

Rumors say that Acacia might let his appetite demon, Neo, consume him. There are also speculations that Neo may eat Acacia from the inside out. Fans believe that if this happens, the world will be in deep trouble. Another theory suggests that if Acacia can eat Neo, then maybe Toriko can also eat his demons.

There are also reports that say Toriko may eat the sought after ingredient called god. This will allow him to control all his appetite demons. If this comes true, readers will be in for a treat since he may become strong enough to fight Acacia.

Of course, all of these are just speculations. Readers will have to wait for the actual chapter to see how the story unfolds.