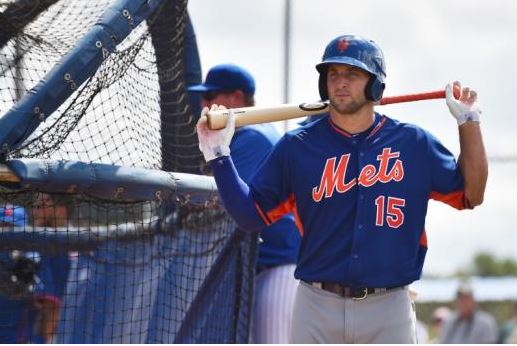 This week, former professional football player Tim Tebow made his much-anticipated debut in the Arizona Fall League. Fans and autograph seekers watched the 29-year-old as he attempted to play his way into the baseball major leagues, but what happened after his game playing for the Scottsdale Scorpions amazed his followers even more.

It was reported that after his game on Tuesday, Oct. 11, the former NFL quarterback was signing autographs when he noticed a fan identified as Brandon Berry having what appeared to be a seizure. According to ABC, Tebow went over to Berry who was down on the ground. The athlete then reportedly placed his hand on the fan and bowed his head to say a prayer. Shortly after Berry was touched by Tebow, witnesses claim that Berry regained consciousness and started coughing.

“It was a miracle moment that happened there,” a witness, Daniel Kelly, told the Associated Press. Tebow, who is known for his athleticism as well as his Christian beliefs, is said to have stayed with Berry until the EMTs arrived to take the fan to the hospital.

ABC reporter Kari Van Horn was at the Scottsdale Scorpions game and tweeted about the incident, saying, “Tebow signing autographs. Fan has what looks like a seizure. Not moving. Tebow puts hands on him and says a prayer. Man breathes. WOW.”

Later, Van Horn tweeted that she was heading back to the station and that she has a video of what happened.

“I just witnessed a miracle,” said the ABC reporter. It was reported that the 30-year old fan was transported to an emergency room by the Phoenix Fire Department and is doing fine at home.

On Wednesday, Tebow spoke with ESPN to explain why he chose to help the fan, saying that it was the right thing to do.

“In my opinion, it’s not even a choice. It’s the right thing to do,” Tebow said. “People are what’s important. And an opportunity to help someone is more important than anything that I could have possibly done on a baseball diamond that day.”

ESPN reports that the athlete acknowledged that Berry regained consciousness as he placed a hand on him to pray, but said that what he did was not a miracle.

“As far as me and a miracle, no,” said Tebow. “But in the God that we serve, yeah, I do believe in miracles.”