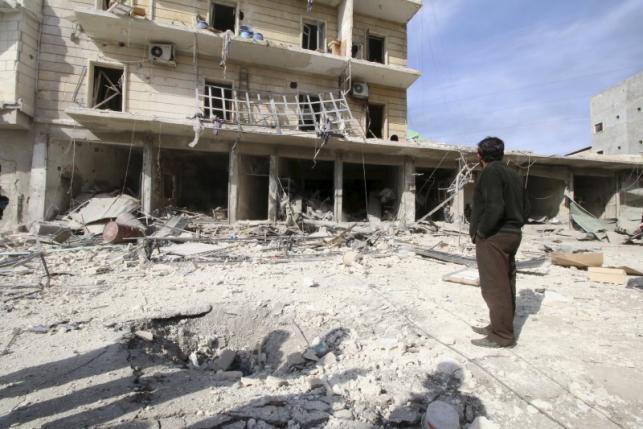 Tens of thousands of Syrians fled an intensifying Russian assault around Aleppo on Friday, and aid workers said they feared the major city could soon fall under a full government siege.Iran reported one of its generals had been killed on the front line, giving direct confirmation of the role Tehran is playing along with Moscow in what appears to be one of the most determined offensives in five years of civil war.

The government assault around Aleppo, and advances in the south and northwest, helped to torpedo Geneva peace talks this week. Russia’s intervention has tipped the war President Bashar al-Assad’s way, reversing gains rebels made last year.

The last two days saw government troops and their Lebanese and Iranian allies fully encircle the countryside north of Aleppo and cut off the main supply route linking the city – Syria’s largest before the war – to Turkey. Ankara said it suspected the aim was to starve the population into submission.

Aleppo would be the biggest strategic prize in years for Assad’s government in a conflict that has killed at least 250,000 people and driven 11 million from their homes.

Video footage showed thousands of people massing at the Bab al-Salam crossing on the Turkish border. Men carried luggage on their heads, and the elderly and those unable to walk were brought in wheelchairs. Women sat on the side of the road holding babies and waiting to be allowed into Turkey.

Rights group Amnesty International urged Turkey to let in those fleeing the latest violence, after reports the border remained closed.

“It feels like a siege of Aleppo is about to begin,” said David Evans, Middle East program director for the U.S. aid agency Mercy Corps, which said the most direct humanitarian route to Aleppo had been severed.

“The situation in Aleppo is a humanitarian catastrophe,” said an opposition spokesman still in Geneva after the ill-fated peace talks. “The international community must take urgent, concrete steps to address it.”

“The Russian (air) cover continues night and day, there were more than 250 air strikes on this area in one day,” Hassan Haj Ali, head of Liwa Suqour al-Jabal, a rebel group fighting in northwest Syria, told Reuters.

“The regime is now trying to expand the area it has taken control of,” he added. “Now the northern countryside (of Aleppo) is totally encircled, and the humanitarian situation is very difficult.”

Syrian state TV and a monitoring group said the army and its allies had seized the town of Ratyan north of Aleppo. Haj Ali said the town had not yet fallen, but that there were “very heavy battles”.

The Syrian Observatory for Human Rights monitoring group said some 120 fighters on all sides had been killed around Ratyan.

The Syrian army and its allies broke a years-long rebel blockade of two Shi’ite towns in Aleppo province on Wednesday, cutting off a major supply line from Turkey to Aleppo.

Aleppo, Syria’s commercial hub, has been divided for years between a section under government control and areas in the grip of rebels. Much of the UNESCO heritage old city is in ruins.

Any government siege would target the rebel-held parts, where more than 350,000 people live. Well over a million live in the areas under government control.

Haj Ali said most of the fighters on the government side were “Iranian and from Hezbollah, or Afghan”.

The five-year-old civil war pits the government led by Assad, a member of the Alawite sect derived from Shi’ite Islam, against a range of insurgents who are mainly Sunni Muslims, backed by Saudi Arabia, other Arab states and Turkey. Western countries have lined up in opposition to Assad.

Since 2014, the Sunni jihadist group Islamic State has run a self-proclaimed caliphate in eastern Syria and Iraq, under air assault from a U.S.-led coalition. Russia launched its own separate air campaign four months ago to aid its ally Assad, transforming the battlefield.

But swathes of the country are still in the hands of armed rebels, including Islamic State in the east, Kurdish militia in the north, and a mosaic of groups in the west who have been the target of many of the Russian air strikes.

Syria’s government forces and allies have made further gains in the southern province of Deraa, recapturing a town just outside Deraa city.

It has been backed by some of the heaviest Russian air strikes since it began its bombing campaign in September, a rebel spokesman in the area said.

The talks convened this week in Geneva were the first diplomatic attempt to end the war in two years but collapsed before they began in earnest. The opposition refused to negotiate while Russia was escalating its bombing and government troops were advancing.

NATO said Moscow’s intensified bombing campaign undermined the peace efforts and warned Russia was creating tensions by violating the airspace of Syria’s neighbor Turkey, a NATO member which shot down a Russian warplane in November.

Russia has accused Turkey of preparing a military incursion into northern Syria. Ankara dismissed this as propaganda intended to conceal Russia’s own “crimes”. Aleppo was threatened with a “siege of starvation”, and Turkey had the right to take any measures to protect its security, it said.

Moscow says its targets in Syria are restricted to Islamic State and al Qaeda’s Syrian branch, the Nusra Front, both of which were excluded from peace talks and unacceptable to the countries supporting the insurgents against Assad.

“Why did the opposition that left Geneva complain about the offensive in Aleppo, which is actually targeted against Jabhat al-Nusra (Nusra Front) and other radical extremist groups?” said Russia’s ambassador to the United Nations in Geneva, Alexey Borodavkin.

That position is rejected by Western and Arab countries, which say most Russian strikes are against other opponents of Assad, not the banned groups.

Nusra Front said in a statement on Friday it had killed 25 Iranian fighters and Shi’ite militiamen in fighting in Aleppo.

Saudi Arabia said it was ready to participate in separate U.S. ground operations against Islamic State. The United States welcomed the Saudi offer, although Washington so far has committed only to small scale operations by special forces units on the ground in Syria.