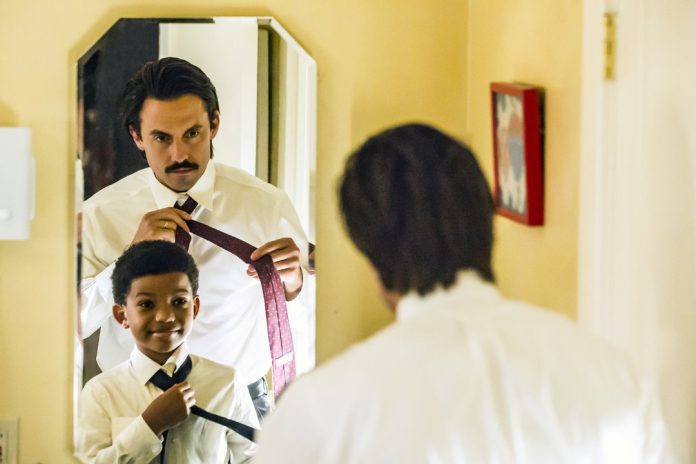 Milking the ongoing fascination with everything Jack (Milo Ventimiglia), tonight’s installment of “This Is Us” brings fans back to the time when the Pearson patriarch was still finding his way to becoming a good father.

If it is any indication, the three kids have bonded with their dad despite his shortcomings in terms of being a husband, as pointed out by Rebecca (Mandy Moore) in episode 2, and Kevin’s (Justin Hartley) continued longing for more affection from him. Following last week’s emotional reveal that Jack has indeed passed away sometime between 2006 and 2016, the family drama continues to tap into his backstory showing him at a time when he needed to make sacrifices for his family.

In an exclusive clip courtesy of TV Line, the father of three has to make tough decisions in order to provide for his family. The younger Jack seemed to enjoy going on field work as part of a construction crew. However, he is forced to take a desk job in order to support his growing kids who are now going to school. As the years go by, he forges on with his brand-new life but never really letting go of his original aspirations.

In line with the show’s format, Jack’s struggles are paralleled with the current experiences of the three Pearson kids who are also reevaluating their careers, hence the title of the episode, “Career Days.”

Kevin, as revealed by the story so far, has been trying to make a career shift by acting on Broadway. Kate (Chrissy Metz) is up for a new job that will force her to work with her newest client’s daughter who apparently also has body image issues. Randall (Sterling K. Brown), on the other hand, starts second guessing his career path despite excelling in his chosen field. This specific plot ties back to his childhood as the upcoming episode will reveal that he is gifted.

In the official promo for the episode, it is revealed that the adopted Pearson kid has been faking not knowing things so he does not stand out from his peers.

Meanwhile, for viewers who are still grieving over that fact that Jack is dead, Metz is actually sharing the Kleenex as she revealed that she was also let down by the reveal.

“I was distraught. I was like, ‘What the actual hell?’ And what does this mean? And then, we find that Rebecca has married Miguel [Jon Huertas], who is obviously our stepfather for some time,” she said during the “This Is Us” panel at Entertainment Weekly’s PopFest last weekend. “Jack is everything to Kate and they have this really special bond and so do Milo and I. So, it was heartbreaking.”

Khloe Kardashian and Lamar Odom updates: Former couple are 'not back...