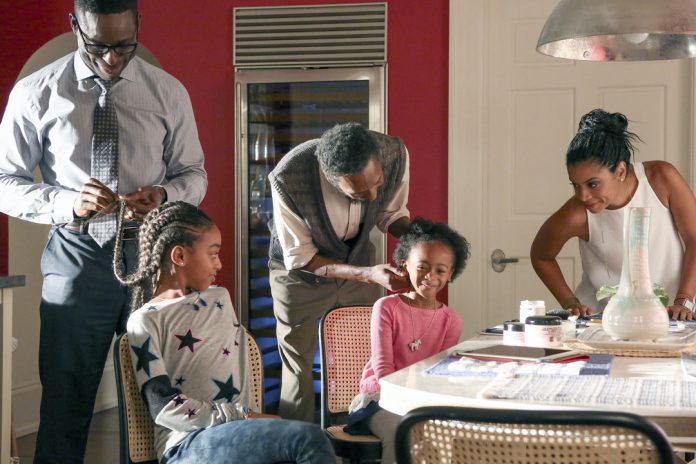 After Rebecca (Mandy Moore) warmed up to Kyle who had his name belatedly changed to Randall (Sterling K. Brown) last week, “This Is Us” once again jumps a couple of years in the past to when the kids were toddlers. However, somehow the show is still able to keep the majority of the interest on the adopted Pearson kid.

As previously shown in the family drama, Jack (Milo Ventimiglia) and Rebecca seemed to be trying to work on their marriage after the latter aired her sentiments about the former’s drinking habits. The issue may have looked to be resolved at least up to some point, but their struggles continue as external factors start to pile up.

In tonight’s episode called “The Pool,” when the family of five goes to a community pool, they are confronted due to being a mixed family in the neighborhood. This incident appears to have direct links to the future setting as William (Ron Cephas Jones) gets reported as a loiterer in Randall’s predominantly white neighborhood. The tension around Randall mounts especially with the reveal last week that he had the chance to know his biological father, only that Rebecca struck a deal with him. Furthermore, the fact that William does not have that much time to live may ultimately drive some of the emotional pull, more so if Randall finds out that his adoptive mother and real father concocted a plan against his back.

Regardless, Moore shared that her character has a different kind of love for Randall to the point that it might be even dubbed as favoritism.

“I do know that from a young age Rebecca felt a responsibility to shower Randall with love and affection and to make sure he didn’t feel different because the twins are so bonded and they were this couple’s biological children,” she told The Hollywood Reporter in a recent conversation. “She feels it’s their duty as parents to make sure he doesn’t feel different and maybe in trying to show him as much love and affection as she possibly can has maybe shown him too much. Like she’s showing him some sort of favoritism over the other kids. That’s an integral part of the relationship between Randall and Rebecca.”

In the promo clip for the upcoming installment, a montage of events from different timelines is shown including the aforementioned pool sequence.

Elsewhere in the present day, Kate (Chrissy Metz) is coming to terms with Toby (Chris Sullivan) being previously married to slimmer lady who they coincidentally bumped into while out. Given that the middle Pearson child has had issues with her weight and body image, as established in the last couple of episodes, her mind goes into overdrive and once again starts doubting their relationship.

Kevin (Justin Hartley), on the other hand, finally lands in the East Coast to start his dreams of being on Broadway when he meets a thriving actress who is skeptical about him. The former “Manny” actor also visits Randall where he chances upon William in his brother’s house. Unfortunately, it seems like Randall still does not know how to introduce his real father to his adopted family.