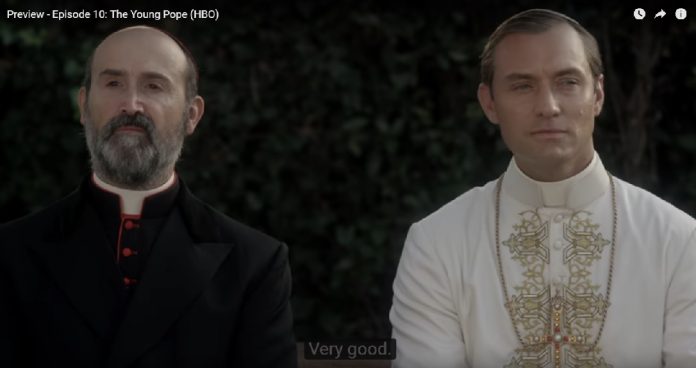 Cardinal Gutierrez (Javier Camara) reportedly failed to prove that Archbishop Kurtwell (Guy Boyd) is a New York child molester. The sad-faced priest nailed it. With the help of a secret son, and video surveillance, Gutierrez had everything he needed to remove Kurtwell from his rich church community.

Scared of getting evicted, Kurtwell showed a journalist the love letters written by Pope Pius XIII (Jude Law). Unfortunately, the letters were unsent, and they were without a receiver’s address, rendering them useless.

Back in Vatican City, Cardinal Spencer (James Cromwell) was dying, and he was seen talking to the pope, Lenny, about the latter’s prayer that healed his friend’s mother in the orphanage. Spencer reassured Lenny’s faith in God.

Somehow, his recent loss the deaths of Spencer and Cardinal Dussolier (Scott Shepherd), as well as being away from Esther’s (Ludivine Sagnier) child has helped the Holy Father to move on and become the man that God wants him to be.

In the final episode, Kurtwell faces a trial in the Vatican, which seems to be the grand finale of the HBO series. If he was forgiven and his reasons for doing what he did were all revealed in the finale.

Now considered to be a perfected servant of God, the pope is said to face the Catholic congregation once more to deliver his papal speech.

Gutierrez has returned to Rome, and it looks like his journey has diminished his lack of self-confidence. But, he has planned to make confession to Lenny about something that the pope has already known from the start.

Apart from this the finale also saw Sister Mary (Diane Keaton) leaving the Vatican to take over the administration of Sister Antonia’s villages of mercy.

The episode ends with an ambiguous shot of the pope collapsing.

The Originals Season 3 spoilers: Hayley and Klaus at odds; Elijah...