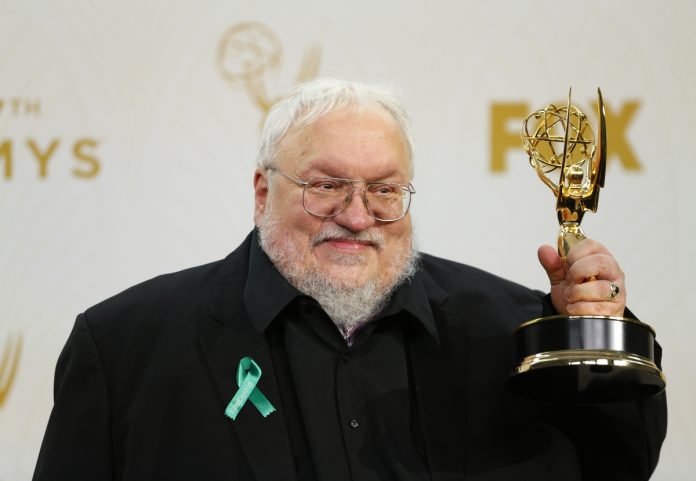 George R.R. Martin recently took a break from his year-long promise that he would devote most of his time to finishing “The Winds of Winter.” The famed author made an appearance at the 74th World Science Fiction Convention (WorldCon) in Kansas City last week.

The 67-year-old attended the event’s MidAmeriCon II panel where he met with his fans to celebrate the launch of his latest offering, “High Stakes.” Being the 23rd installment in the “Wild Cards” series, the book takes on a more futuristic superhero feel which cannot be more different than HBO’s “Game of Thrones.” Nevertheless, the project will also soon be told via performing media as Martin notes that it has similarities to what Marvel TV and DC TV have been doing with their properties.

Despite the project being entirely separate from “A Song of Ice and Fire,” the panel was still flocked by fans given the special kind of narrative Martin can come up with. And while he was there to only promote the his forthcoming novel, The Kansas City Star could not help but sneak in a subtle question about how “The Winds of Winter” is doing. Instead of directly asking him, the media publication inquired about his writing process.

“There’s not much I can tell you,” Martin simply stated. “It’s slow. I’m a slow and painstaking writer always have been. Sometimes I don’t know how the hell I do it. I sit down, and on a good day stories come out. And on a bad day, I struggle and I read my email.”

There have already been a couple of times that Martin himself admitted that he needs to brew his stories first before he could progress whatever project his is currently working on. Couple that with the story scope of every book from the “A Song of Ice and Fire” series, and his writing time table can somehow be understandable.

Still, no official date for release has been disclosed when it comes to the sixth novel of the fantasy series. But earlier this month, famous theorist BryndenBFish shared that he believes that “The Winds of Winter” will finally be available sometime early next year.