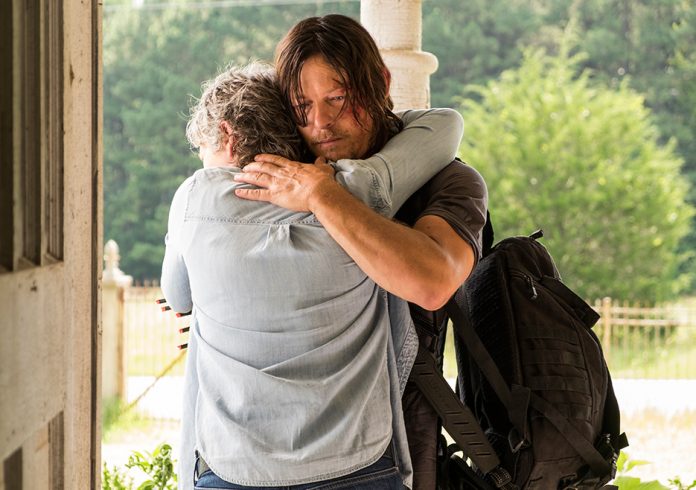 One of the highlights in the last episode of “The Walking Dead” was Daryl’s (Norman Reedus) reunion with Carol (Melissa McBride). While Rick (Andrew Lincoln) and the rest of the zombie hunters went to meet with Jadis’ (Pollyanna McIntosh) junkyard community, Daryl was off to see his best friend, and Reedus described the meeting as a “bittersweet” get together.

“It’s hard and it’s a bittersweet reunion. We enjoy it, but we don’t enjoy being apart,” Reedus told Entertainment Weekly about the tear-jerking scene and how he missed working with Lincoln and McBride.

“There are certain characters where as soon as they start going, we start bawling,” he added.

In the episode titled “New Best Friends,” Daryl killed Richard (Karl Makinen) after disagreeing to the latter’s plan to frame the woman at the cottage. Daryl found Carol’s cottage, and the two met once again. Carol asked how everyone’s doing, but Daryl lied about the horrific fate of Glenn (Steven Yeun) and Abraham (Michael Cudlitz).

“She’s going through her own thing and there’s a reason why she separated herself and doesn’t want to be a killer anymore. And she’s losing herself, and I think Daryl realizes that,” Reedus explained his character’s selfless act. “He tells her what she needs to hear to keep going,” he continued.

Also, there is a “Mad Max” inspired scene wherein Rick fought with a walker in spiked armor in order to win Jadis’ trust so that the Scavengers will join the fight against the Saviors.

Reedus asserted that he intentionally flew in to watch the fight. He appreciated Gino, the guy who played the beast, for pulling it off. He said that it’s one of those scenes that he really wanted to be in.

In the season 7 upcoming episodes, the 48-year-old actor hinted that Daryl would be leaving the Kingdom for the Alexandrians, his true family. Rick’s right-hand man wants revenge.

“He wants to fight and get this over with to get rid of these bad guys,” said the actor who plays Daryl.