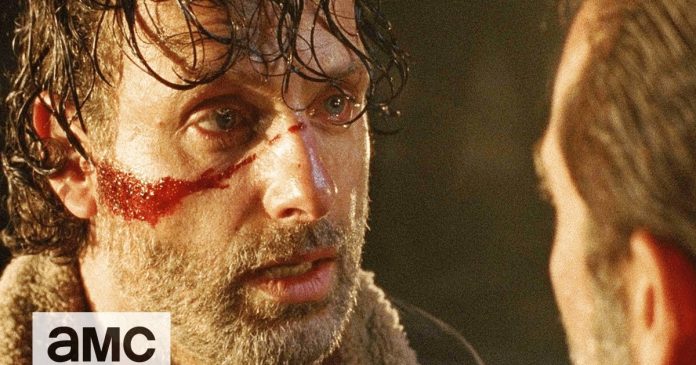 It is difficult to imagine that “The Walking Dead” fans were able to survive these past few months without knowing who ended up getting smashed by Lucille in the season 6 finale of the hit AMC series. Now, with less than two weeks to go before the much anticipated and equally dreaded reveal, viewers are getting hyped up once again with what could be the most concrete hint as to who the unfortunate victim might be.

In a freshly released teaser trailer for the season premiere, the clip reveals what comes immediately after Negan’s (Jeffrey Dean Morgan) assault on the yet to be revealed Alexandrian. While the new big baddie in town gloats about what could be the most horrific predicament Rick (Andrew Lincoln) and his team has ever gone through, the former sheriff’s deputy is obviously in immense distress. But despite the frightening situation that he is in, Rick utters a quiet but motivated threat telling Negan to his face that someday, he is going to kill him.

Negan, obviously having the upper hand in the current showdown, then drags Rick to his trailer for a more private conversation. But it is safe to assume that whatever goes down in that sequence will involve more than talking and Rick losing his hand like how it was in the comic books. In the final moments of the trailer, as the perspective follows the two moving away, the camera slowly pans to a discarded piece of clothing near a puddle of blood, presumably from the show’s latest casualty.

The scene has been rewound and dissected a lot of times since making its debut. TV Guide, who was part of the lot that devoted its time and effort just to get a bit of idea on who was Negan’s victim is, came to the conclusion that there is a high chance that it is Maggie (Lauren Cohan) as they chalk it up to the angles and other hints in the sequence.

If anything, the short clip did not give the feel of being rushed. It seemed like the scene capitalized on every pause and silence to drive the traumatizing point of loss for the Alexandrians. If this is any indication as to how season 7’s first episode will turn out, fans should brace themselves for an emotionally tiring Sunday night. This makes sense as it is the only plausible way for “The Walking Dead” to make up for the cliffhanger earlier this year that had them receive enormous backlash.

Greg Nicotero, a longtime producer on the post-apocalyptic show who directed the installment, previously cautioned viewers telling Entertainment Weekly that “it was by far the most emotional episode” that he has ever shot.

“Where we left these characters at the end of season 6 is, they’ve been broken. Their world has literally become smaller and smaller and trapped them, and now they’re in a situation that they’ve never been in before where the cavalry is not coming over the hill,” he continued.

Married at first sight season 3: Couples to work on their...