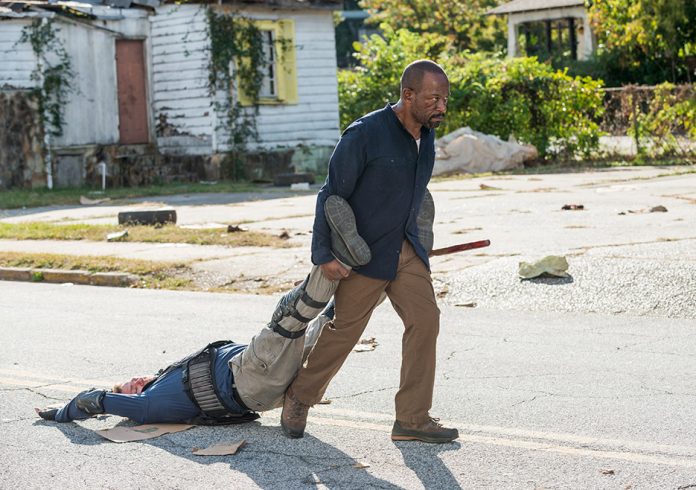 Life is no longer precious for Morgan (Lennie James), as seen in the 13th episode of “The Walking Dead.”

In “Bury Me Here” episode, Ezekiel’s (Khary Payton) Kingdom met with the Saviors for their weekly offering. One of the members of Negan’s (Jeffrey Dean Morgan) team found out that they’re one cantaloupe short. He shot Benjamin (Logan Miller), who bled to death. Morgan found out that it was Richard’s (Karl Makinen) doing. The latter confessed that he planned to sacrifice himself to provoke the Kingdom to go to war against the Saviors. However, Morgan killed Richard and buried him.

“It’s anger, and it is fulfilling Richard’s plan for him,” showrunner Scott M. Gimple, who also wrote the episode, told Entertainment Weekly about Morgan’s decision to go back to killing mode.

Back in the episode, Morgan went to see Carol (Melissa McBride) to bid her farewell, but he ended up telling her that Negan murdered Glenn (Steven Yeun), Abraham (Michael Cudlitz), and others.

“I think it’s him sort of looking at the world as a dark and brutal place and telling the truth to someone who’s asking for the dark and brutal truth,” Gimple described Morgan’s motive.

Carol, in the later part of the episode, left the cottage to see Ezekiel. She convinced the Kingdom’s leader to fight against Negan.

In the upcoming episode, titled “The Other Side,” the Saviors are heading to the Hilltop. Can Daryl (Norman Reedus) and Maggie (Lauren Cohan) escape?

“The Walking Dead” season 7 will continue on March 19 on AMC.