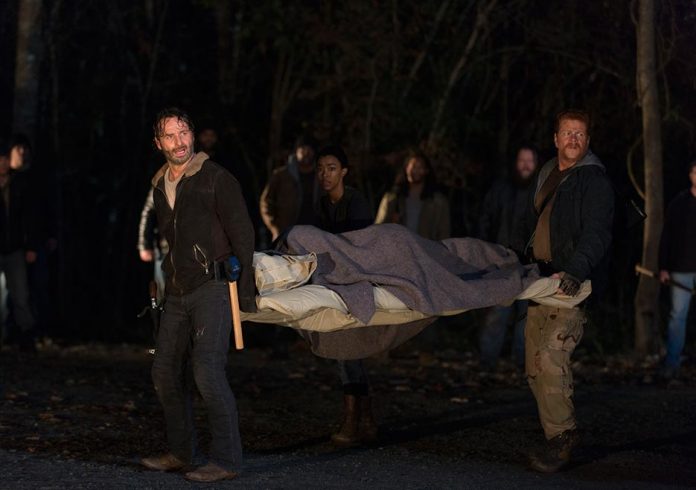 The flames of rumor about the truth of the latest turn of events in the storyline of AMC’s zombie apocalypse horror drama “The Walking Dead” continue to flare ever higher despite season 6 having been over for over two months and the upcoming season 7 still a long way coming. To the point that the show’s producers have resorted to drastic measures to fight against spoilers.

Season 6 of “The Walking Dead” ended on one of the biggest cliffhangers ever in the history of the show, with the finale managing to combine the pressures of introducing a long awaited villain character and possibly killing off a fan favorite after much frustrating twists and turns.

The season finale, titled “Last Day on Earth” showed the capture of Rick (Andrew Lincoln) alongside most of the main Atlanta crew, and the introduction of Saviors leader Negan (Jeffrey Dean Morgan) and his baseball bat Lucille. The episode then ended with Negan performing his own introduction by introducing Lucille to one of the survivors’ skulls, with the season ending on a cliffhanger by not showing who the victim was.

As a cliffhanger, the ending was highly controversial and caused substantial backlash for the producers but they have repeatedly stood by their choice of creative direction. Furthermore, they have also instituted a new method to try to combat spoilers of specifically who it was that faced off with Lucille, according to sources for The Hollywood Reporter.

The footage will then be used as part of the development team’s selection process in who will meet their unfortunate end, meaning they will only have to edit the footage without risking the possibility of the filming process spoiling the identity of the actual victim.

The above is only the latest in a long line of the producers’ attempts to fight against possible spoilers for the show, with their previous efforts including somewhat draconian methods such as issuing a cease and desist order against one of the more prominent spoiler groups dedicated to the show: The Spoiling Dead.

As the producers continue to step up their anti-spoiler methods, viewers may have no choice but to wait until the official reveal when “The Walking Dead” season 7 begins in October on AMC.