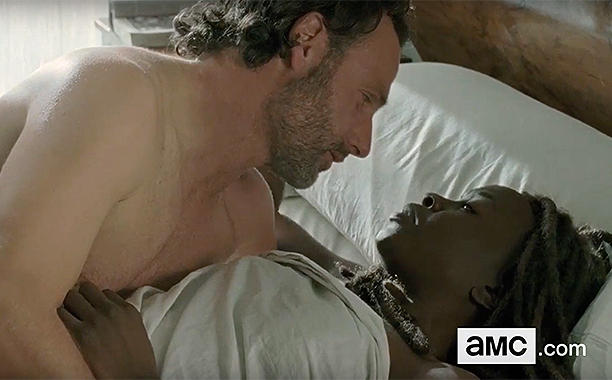 In the middle of the zombie apocalypse, coupled with occasional big bullies with a bunch of henchmen, “The Walking Dead” also has a revolving theme of relationships among the Alexandrians, or at least those who are still alive. Last season was the birth of what fans have dubbed as “Richonne,” the link between pack leader Rick (Andrew Lincoln) and the Katana-swinging warrior, Michonne (Danai Gurira).

While the pairing seemed odd at first, causing different reactions from fans, Gurira shared that her character may have already been fascinated with Rick for quite some time.

“I think she’s probably been in love with Rich for a while,” she explained in an exclusive behind-the-scenes commentary from the show’s upcoming home disc release (via People). What’s more is that it appears that Michonne was even trying to hold it together as she added that her character was “definitely cutting herself off from her heart.”

“He had a mission in his mind to take care of her need,” Gurira continued. “That’s kind of that, ‘Oh my god that’s so sweet’ moment but apocalypse-style.”

During the show’s panel at the recently held San Diego Comic-Con, Gurira also shared that Carl’s (Chandler Riggs) acceptance of her may also play a huge part in the romantic relationship of Michonne and Rick. In fact, she felt that it was her now beau’s son who warmed up to her first before the former town sheriff.

Coming into the new season, it is still unsure how things will pan out between the new lovers. But given Lincoln’s comments, coupled with co-executive producer Denise Huth statement about the two’s friendship, fans can expect that “Richonne” will last quite some time.

“These are two characters that have known each other for a very long time and have become very important to each other,” Huth stated. “There is a great deep friendship between the two of them.”

“Walking Dead: The Complete Sixth Season” will be released on Blu-ray, Digital HD and DVD on Aug. 23. “The Walking Dead” season 7, on the other hand, will premiere on Oct. 23 and will continue to air every Sunday night, 9 p.m. ET on AMC.