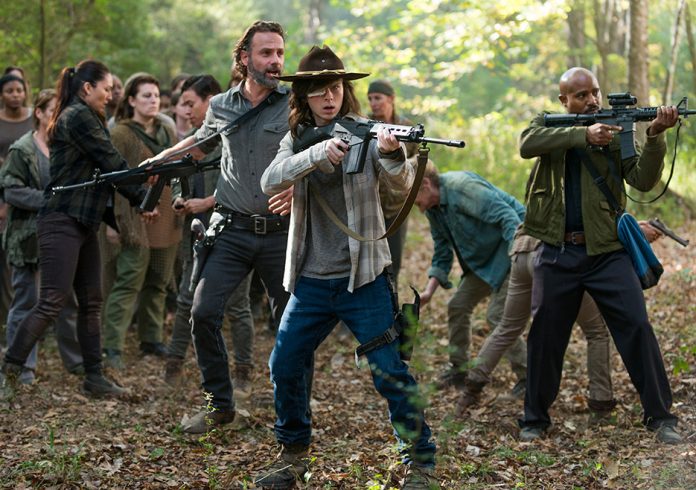 Just when the fans of “The Walking Dead” thought that they have seen enough. The showrunner and cast members shared some noteworthy teasers for the upcoming finale of the show’s seventh season.

It has been confirmed that the current season would end with the comic book’s “All Out War” arc, and showrunner Scott M. Gimple hinted that they are going at full speed until the final episode.

“We step on the gas and we do not let our foot off the gas until the end of episode 16,” Gimple stated. “I mean, the next three episodes we’re going to shoot you through a lot of big events and things become quantum intense,” he continued.

As seen in the previous episodes of the second-half of the season, Rick (Andrew Lincoln) has been in recruitment mode. He’s assembling as many allies as he could find in order to take down Negan (Jeffrey Dean Morgan) along with his cruel group of Saviors.

“I promise you, there is one beat in [episode] 16, I dropped my script and started punching the air and did a little jig,” Lincoln revealed. He also said that Rick and his constituents are back together again to renew their “thrill of the fight.”

Speaking of reunion, Daryl (Norman Reedus) is gearing up to join his original family as they head for a whole different kind of battle.

“It has similar elements, but it’s completely different, and, you know, there might be a little William Wallace in it,” Reedus asserted referring to Mel Gibson’s character in “Braveheart.”

In the penultimate episode, Tara (Alanna Masterson) brought Rick to Oceanside. Although Natania’s (Deborah May) community refused to fight, they provided the Alexandrians with more guns. In the Sanctuary, Negan told Sasha (Sonequa Martin-Green) that a “little birdie” has warned him of Rick’s forthcoming attack.

Who could that be? Did the Scavengers’ leader, Jadis (Pollyanna McIntosh), rat out Rick to Negan?

The finale episode of “The Walking Dead” season 7 is scheduled to air on April 2 on AMC.

'Arrow' Season 4 spoilers: tears and more tears ahead as premiere...