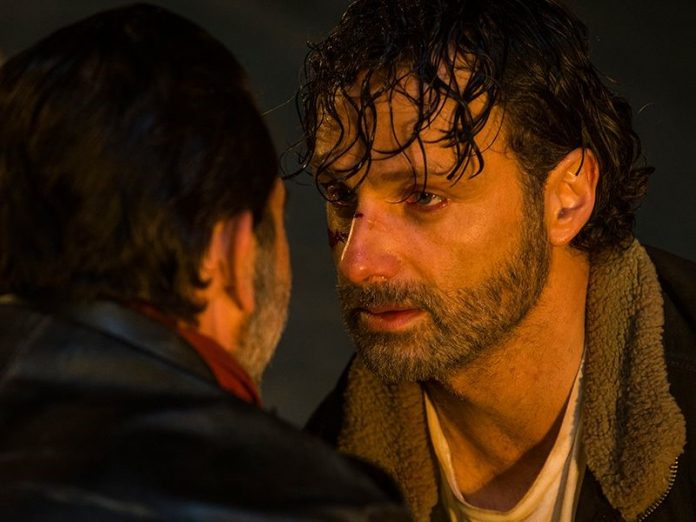 Who’s going to die? That question continues haunt fans ever since the season 6 finale ended. Now that the season 7 premiere is just a couple of weeks away, AMC decided to release a teaser to give viewers a look at what’s going to happen in the episode.

As shown in the teaser, Rick (Andrew Lincoln) has blood splattered on the right side of his face, which means Negan’s (Jeffrey Dean Morgan) victim is probably kneeling on that side. Now, who’s next to Rick?

After the teaser came out, many fans now believe that Lucille is going to bathe in Maggie’s (Lauren Cohan) blood. What appears to be her battered engagement ring was also seen onscreen. This graphic can be a little disturbing.

After that scene, Rick is down but not out. However, Negan is not done either. He talks to his right-hand man, Simon (Steven Ogg), before dragging Rick into a trailer with a hatchet in hand. Sources believe Negan is going to chop off Rick’s right hand in season 7. The character also lost his hand in the comics, but it was the Governor who did it to him, not Negan.

In an interview with Den of Geek, Morgan revealed that Negan was going to kill more than one person. “He’s not afraid of bashing in skulls.” It sounds like Morgan also enjoys playing Negan.

“As soon as the cameras are rolling and I get Lucille in my hand, it kind of just transforms me. This character in particular has been such a joy to play for me. Put the dark stuff aside and the horrible things that Negan does… As an actor, it’s just been so much fun. We’re kind of midway through filming season seven, so I feel like I’m pretty locked in.”