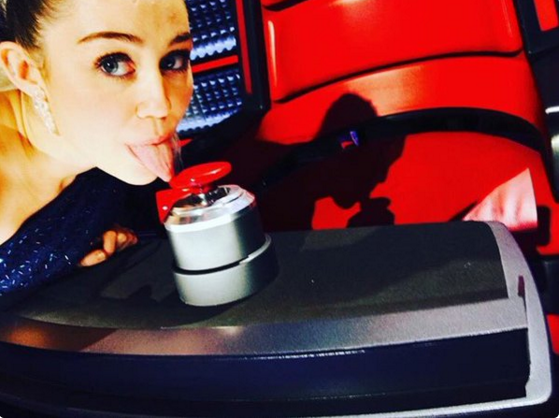 Miley Cyrus will be joining the 10<sup>th season of “The Voice” as a key adviser.

The “We Can’t Stop” singer tweeted a photo of her getting cozy with returning judge, Christina Aguilera’s red button.

Us Magazine reported that NBC has confirmed Cyrus’ new gig on Wednesday.

“When Miley speaks everyone pays attention. Our artists are very lucky to have the benefit of her instincts and wisdom,” NBC executive Paul Telegdy said in a statement. “Our viewers will be treated to an inside look at one of the brightest minds in music and the entertainment industry who is at the forefront of pop culture.”

Cyrus will be the adviser for Aguilera’s team. On the other hand, Gwen Stefani will not be totally booted out from the show as she takes the same responsibility for her boyrfriend Blake Shelton’s team. P. Diddy will join them as adviser for Pharell Williams’ team, while Tori Kelly will be assigned for Adam Levine’s team.

Despite reports of Aguilera being a diva for showing up late in her “The Voice” shoot with celebrity photographer David LaChapelle, an insider told E! News that her comeback shoot was all good vibes.

“Everyone was excited for the shoot,” the source has revealed. “Christina had a great time with David and even shot extra singles as she loved him and the whole concept.”

The 35-year-old singer is indeed back along with her playful attitude as she roasted fellow-judge Shelton for picking a contestant who sounded like Stefani for his team.

Angelina Jolie news: Actress hopes her kids will not go into...