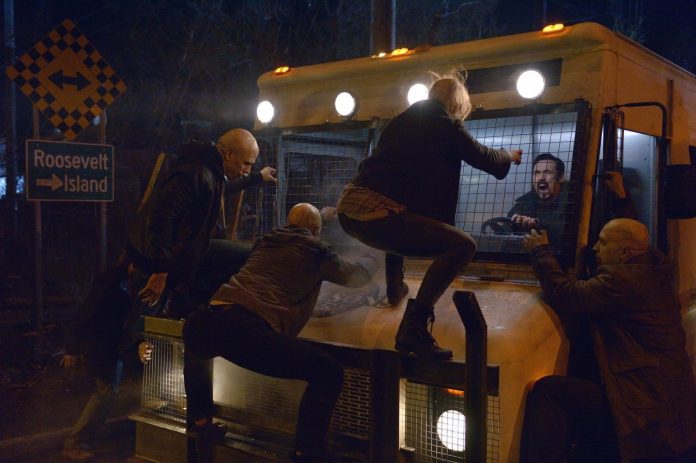 No one is safe as the virus continuously spreads around New York City in the upcoming season 3 of FX’s thriller series “The Strain.”

The network recently released a teaser depicting the iconic statue of Lady Liberty slowly becoming animated. She then turns to face the camera and becomes a strigoi, possibly depicting that the citizens of the Big Apple will soon become blood-sucking vampires as well.

Season 2’s finale saw Nora (Mia Maestro) sacrifice her life in order to stop the Master from turning her into a vampire. This also stopped the latter from finding out vital information about the bioweapon she helped create with Dr. Ephraim “Eph” Goodweather (Corey Stoll). The concluding episode also saw the demise of Coco (Lizzie Brocher).

Presumably to fill the void that the two characters left in the narrative, the network is adding two new faces to the ensemble. The first one is named Kroft (Aaron Lazar), a Navy SEAL team leader who ended up hunting and killing strigois, while the other person is New York Police District captain Kate Nelson (America Oliva). She is expected to be in charge of the combatant squad.

When it comes to the narrative, the fate of humanity lies in the hands of the hunters as they try to successfully defeat the Master, more so now that Setrakian (David Bradley) has the Occido Lumen, a book that shows how to kill the Master. He also has allies in the form of Gus (Miguel Gomez), Fet (Kevin Durand), Angel (Joaqun Coso) and Quinlan (Rupert Penry-Jones).

The synopsis for the next installment teases, “As season three begins, New York City is a battleground. Written off by the federal government, the people of New York City must fight for survival on their own.”

“The question is who will win? Humans or strigoi? Our heroes win victories, but are not winning the war. Beset by personal conflicts betrayal, disappointment, paranoia our group is splintering… Meanwhile, the Master is close to executing an irreversible transformation of the world. Is there still hope to save the city and humanity?” it fully reads.