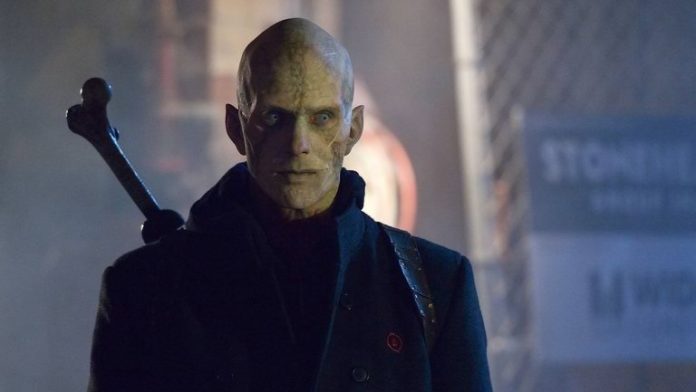 A fan favorite character from the books finally made his way to Episode 7 of The Strain Season 2 and its none other than Quinlan himself.

In the episode entitled The Born, Quinlan’s story was explored dating back to Ancient Rome where he was known as ‘The Barbarian Gladiator.” The episode also delved into his special connection with the Master and explained that his main beef with the latter stemmed from the death of his mother, a recap from TV.com reported.

In The Born, Quinlan sets out to end The Master with the help of Setrakian and Fet but the plan to blow up the villain’s nest did not work as well as they had hoped. The episode seemed to hint at a formidable new opponent for The Master, and one that has a centuries-old grudge to make him extra motivated.

Based on The Strain wiki, “Quinlan is a member of The Born, a rare vampire/human hybrid (dhampir). The “son” of the Master, he hates his father intensely and so serves the three American Ancients as their chief bodyguard and hunter.”

It is still uncertain how Quinlan’s character will develop in the series but he is expected to even the odds against the crusade against The Master in future episodes.

Meanwhile, Coco is seeming to develop a romantic relationship with Palmer, which comes as a wonder to loyal viewers of the show as they seem mismatched at first. Meanwhile, Eph tries to come to terms with the deaths of Rob and Lee, who were killed by Palmer’s men.

The episode also saw Eph’s return to New York after the failure of his plan to destroy the strigoi in which Palmer is also to blame. As a result, he and Nora must devise a new plan to save the human race.