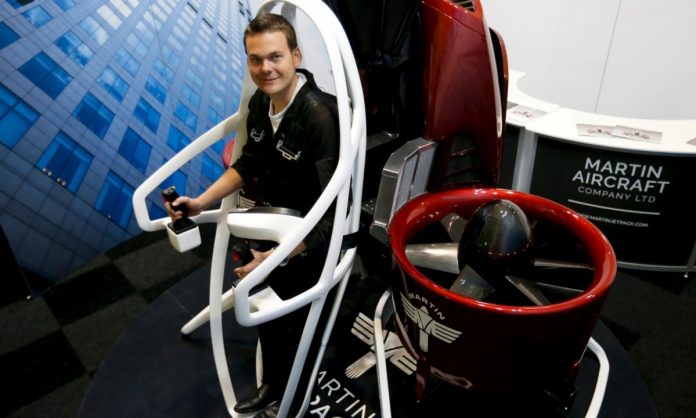 It looks like the days of seeing someone travelling to work by jetpack may finally move from science fiction to reality, with the very first commercially available jetpack from Martin Aircraft coming to the public from next year.

But at least initially, only the richest men in the world will be seen riding the jetpack in the air, as it costs a whopping $150,000. The Martin Jetpack, by Martin Aircraft, is the long-time dream of New Zealander Glenn Martin. Martin was still a university student back when he first dreamed of building a jetpack that would be commercially available. Now, after 35 years of development, the Martin Jetpack is ready to fly.

The Martin Jetpack runs on a V4 200 horsepower petrol engine that drives two ducted fans. It has the ability to fly for more than 30 minutes with a speed of 74 kph and can go as high as 1000 meters. The Jetpack can carry payload of up to 120 kilograms. It has a parachute, should things go wrong during flight. The Jetpack’s Vertical Take-off and Landing (VTOL) technology makes it a practical alternative to traditional helicopters.

The Martin Jetpack P12 was on display at last week’s Paris Airshow, along with a Oculus Rift VR simulator that gave the experience of flying the device in real life.

While this futuristic technology seems like the future of travel for the world’s richest of men, Martin chief executive Peter Coker said the product was primarily aimed for rescue missions and emergency responders.

“I think the first responders will see that as a massive improvement to their capability'” he told Reuters. “So, for example, in the fire services going around to look at the situational awareness of what’s going on, perhaps through water security or even search and rescue on beach patrol, something along those lines. Naturally for the ambulance service getting to a point of importance of rescuing people in the shortest possible time. So there’s a lot of uses within that first responder environment.”

The first batch of the Martin Jetpack is set to be commercially available second half of 2016.