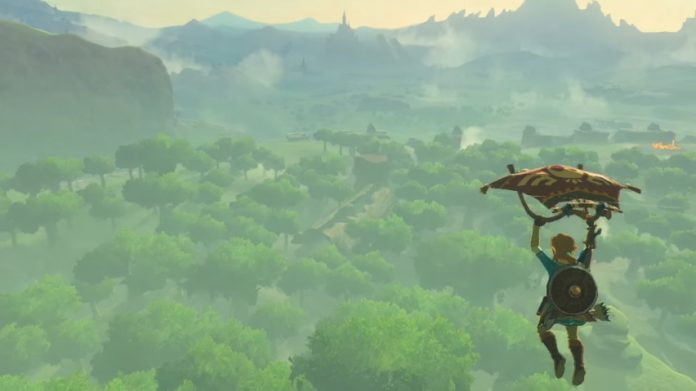 “The Legend of Zelda: Breath of the Wild” showcases Link travelling through the sky and firing on enemies using a paraglider.

As reported by VG247, the new clip of the upcoming “The Legend of Zelda: Breath of the Wild” was released through Nintendo’s official Twitter account. The paragliding feature, which was first revealed in the Electronic Entertainment Expo (E3) 2016 trailer, is explored more in the 44-second gameplay footage.

As can be seen in “The Legend of Zelda: Breath of the Wild” video below, a green circle representing Link’s stamina shows up whenever he uses the paraglider and skills. It can be filled up quickly again whenever the protagonist is not doing anything, such as just standing on the ground.

The footage also revealed that paragliding is not only a means of travelling, but can also be a part of an attack strategy. Link can un-equip the paraglider, equip a bomb and throw it to the enemies below, and reequip it without falling to the character’s demise. However, this combination of moves still drains the stamina.

According to We Got This Covered, Link can also momentarily use a weapon before switching back to gliding and use a fire arrow to create an updraft.

Although the paraglider is something new to the franchise, this is not the first time that Link sailed through the air. “The Legend of Zelda: Wind Waker” released in 2002 for GameCube used a Deku Leaf to travel short distances. Years forward, “The Legend of Zelda: Skyward Sword” in 2011 for the Wii featured a more modern sailcloth, which is used in the same manner as the leaf.

“The Legend of Zelda: Breath of the Wild” is slated for release in 2017 for the Wii U and the upcoming Nintendo NX. An exact release date has yet to be announced.

'The Last of Us 2' release date update: Sequel to start...