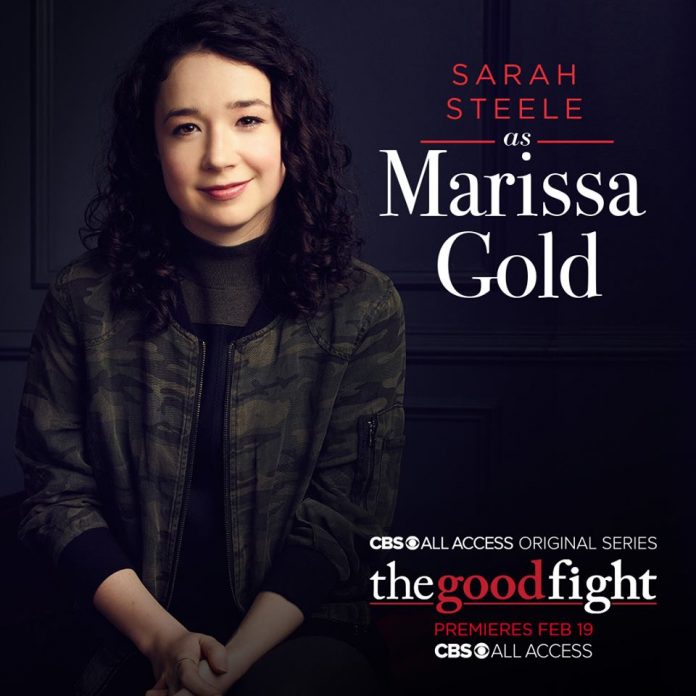 As seen in the highly-rated legal drama “The Good Fight,” Marissa Gold (Sarah Steele) is all grown up. She is now working as a secretary to Diane Lockhart (Christine Baranski) and a budding crime investigator. What is she up to this time?

Marissa was first introduced in the original series, “The Good Wife,” as Alicia’s (Julianna Margulies) assistant.

“People feel comforted by Marissa’s presence, and Alicia kind of had that response to her. She is sort of fearless and isn’t intimidated by anyone and I think that’s a really nice energy to have around,” Steele said, explaining Marissa and Alicia’s partnership to The Hollywood Reporter.

The 28-year-old actress asserted that she was upset during the farewell party of the original show when she heard that there was a spinoff coming up. Later on, the showrunners Robert and Michelle King approached her to be a part of it.

“They were like, ‘Can we steal you for the spinoff in September?’ I was like, ‘Uh, definitely, of course,'” Steeled recalled.

In the current show, Marissa is an investigator-in-training, and according to the actress who plays the role, Marissa has a style that is very different from Kalinda’s (Archie Panjabi) in “The Good Wife.”

“Kalinda is sneaky and mysterious and Marissa is very open and is easily underestimated and people sort of tell her things sometimes without even realizing that they’ve done it because she’s easy to talk to,” said Steele, who is now a regular cast member.

Comparing her character with Alicia and Diane, Steele stated that Marissa was just a body woman for the former while working with Diane is a lot different because her character really cares about what her female boss thinks. Marissa admires the fearless attorney, and she is working hard for Diane to notice her value, says Steele. She added that Maia (Rose Leslie) is Marissa’s go-to person whenever she has concerns.

Meanwhile, in the next episode of “The Good Fight,” founding partner Carl Reddick of Reddick, Boseman, & Kolstad returns to the firm, asking for help.

The “Reddick v Boseman” episode is scheduled to air on Apr. 2 on CBS.