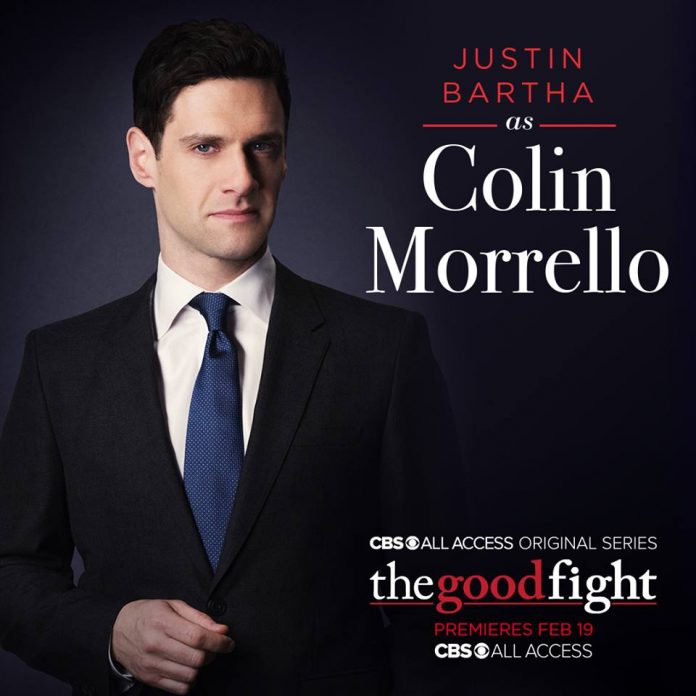 The spinoff series “The Good Fight” is now airing on CBS, and cast member Justin Bartha described his character in the new legal drama show.

“He’s an assistant district attorney in Chicago and he comes from a kind of a dynasty family that is most likely rearing him for some sort of political run,” Bartha explained his role as Colin Morello to Entertainment Weekly.

He added that the show creators, Robert King and Michelle King, described the character as someone who belongs to the “JFK, Jr. archetype.”

Bartha as Colin first appeared in the third episode of the series, titled “The Schtup List.”

In the episode, Diane (Christine Baranski) has a client named Dr. Randolph Picot (Zachary Knighton). The cardiologist has been helping Syrian doctors perform complicated heart surgeries through Skype. One of the patients was a terrorist, so Dr. Picot has faced a lawsuit for violating the U.S. anti-terrorism law. The law prohibits Americans in providing material support or resources to foreign terrorists.

While defending the U.S. government, Colin went against Diane and Lucca (Cush Jumbo) in court. However, Colin seems to have a thing with Lucca.

“He and Lucca have mutual, professional respect for each other, which leads to possible personal feelings. There’s a classic kind of courtship that happens,” Bartha hinted Lucca and Colin’s future chemistry.

The 38-year-old actor shared that the two lawyers would get involved romantically, but their jobs will get in the way of their personal lives.

When asked about when he first came to the show, “The Hangover” star denied having any idea of the role, although he watched the original series “The Good Wife.” However, Bartha got excited when he was told about the new series’ storyline.

“When they told me that it was a show centered around these three strong females who all were being affected by a financial scam that immediately hooked me,” he stated.

The fourth episode of the “The Good Fight” is scheduled to air on March 5 on CBS.

'Attack on Titan' season 2 news: Story to focus on new...