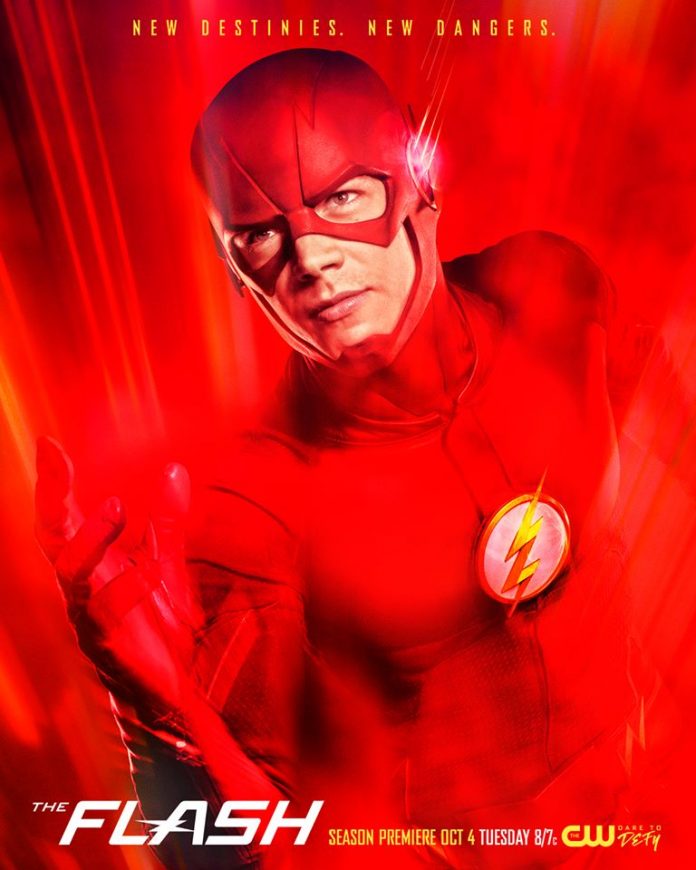 It won’t be long until “The Flash” returns to The CW, and ahead of the show’s season 3 premiere, the network released a brand-new poster to promote the new installment.

In the promotional image, Barry (Grant Gustin) is clad as his alter ego, albeit his costume appears to be slightly changed as it is a brighter shade of red than usual. But it looks like Barry will still be wearing his dark red costume as early photos of season 3 show Gustin’s character in his old suit.

The new season will begin with the episode titled “Flashpoint” which sees Barry dealing with the repercussions of changing the timeline. It can be recalled that in the season 2 finale, Barry dealt with his grief by going back in time to save his mother from being murdered. When the show returns, he will be living his dream life, with both his parents alive and by his side. However, Barry finds out that everything has changed as both Iris (Candice Patton) and Joe (Jesse L. Martin) do not know him, and moreover, there’s another speedster, Kid Flash (Keiynan Lonsdale), in Central City. As his memories and his powers start to fade, Barry must decide if he wants to continue to live the life he always dreamed of, or if he wants to go back to the way it was.

Meanwhile, it appears that Kevin Smith, who will be directing an upcoming episode of the new season, has leaked the title of episode 7. In a Twitter post on Sept. 14, Smith shared a photo of the first page of the script, wherein the words “Killer Frost” can be seen on top. Killer Frost is Caitlin Snow’s (Danielle Panabaker) Earth-2 doppelgnger who was stabbed by Zoom (Teddy Sears) in season 2. While most fans assumed that she died, it appears that she’ll be returning in season 3.

On Monday, Smith shared a photo taken from the set which shows Iris, Cisco (Carlos Valdes), and Barry at S.T.A.R. Labs. The director captioned the shot, “Day 4 of 9 directing on @CW_TheFlash – but I wish it was still Day 1. Gonna hate leaving this wonderful world…”