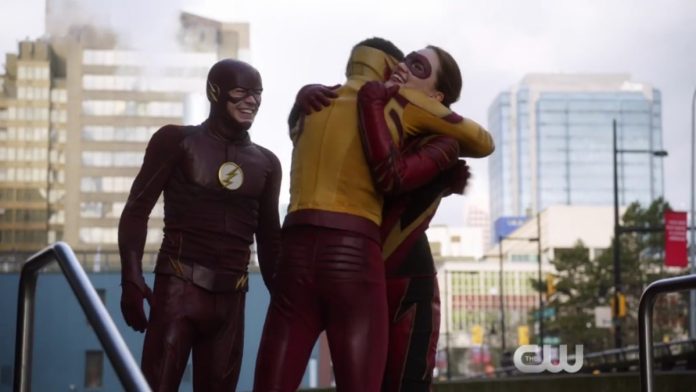 It seems Savitar has returned to complete his prophecy in the latest episode of “The Flash.”

Looking back to the ninth episode, Barry/Flash (Grant Gustin) was brought to the future wherein he witnessed Savitar killing Iris (Candice Patton). The villain exposed his prophecy, saying, “One shall betray you, one shall fall, one will suffer a fate far worse than death.”

It appears that the grim prophecy has started to unfold as the third season of the series progresses.

In the 15th episode, Barry proposed to Iris, but he did so because of the fear of losing her rather than wanting to spend the rest of his life with her. He believed he could save the young lady from her dreadful fate.

“Barry’s so desperate to save Iris that he is starting to lose it a little bit,” executive producer Andrew Kreisberg revealed to Entertainment Weekly. “The stress of what they’re facing starts to damage their relationship,” he added.

In the episode titled “The Wrath of Savitar,” Caitlin (Danielle Panabaker) admitted that she’s keeping a piece of the Philosopher’s Stone so that she can use it to remove her powers. Meanwhile, through visions, Savitar kept on taunting Wally (Keiynan Lonsdale). He eventually stole the piece of the mystical stone and launched the Speed Force. In spite of Barry’s interference, Wally was immersed into the portal, and then Savitar appeared.

The episode also showed Barry training Wally to become a Flash so that the latter could assist him when they need to protect Iris. However, Wally being a Speedster served as one of Savitar’s advantages.

According to the showrunner, Savitar can only be freed from the Speed Force if he has someone to replace him. “So when Wally is sucked into the Speed Force in episode 15 and Savitar escapes, that’s how Savitar is freed,” Kreisberg explained.

Unless Barry finds a solution to this, it looks like Iris is doomed, and Wally could suffer a fate worse than death.

Kreisberg teased that the fans would soon get to see who the real traitor is. Is Caitlin the traitor?

The next episode of “The Flash” is scheduled to air on March 14 on The CW.