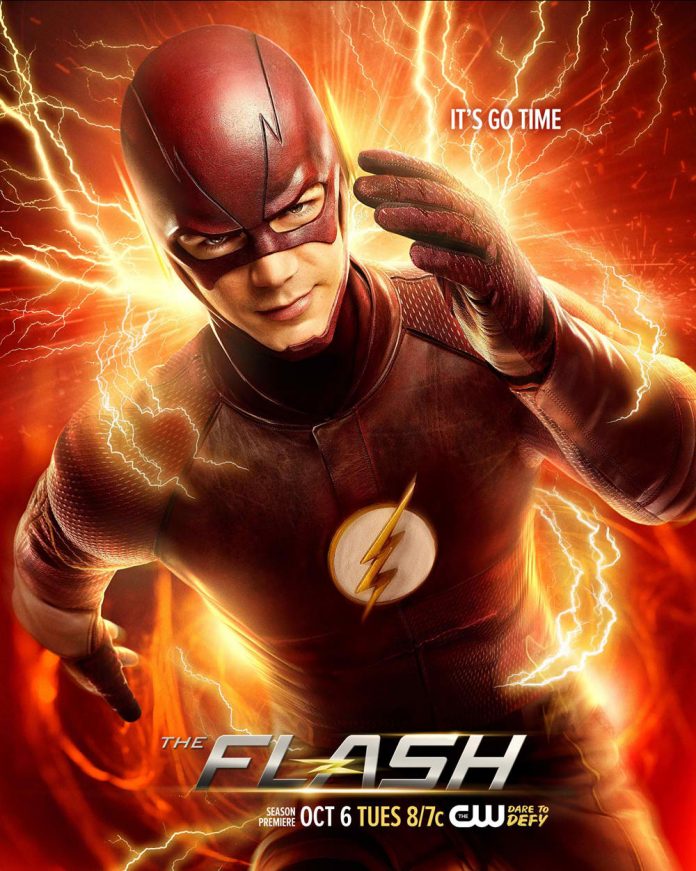 The CW just revealed the first official poster for the upcoming new season of the hit series The Flash, and it shows show star Barry Allen running at full speed, wearing his new costume as The Flashwith the new white lighting chest symbol that is a closer take on the comics. The poster has a tagline that says: “It’s go time.”

In casting news, another speedster comes to the show! According to a report by TVLine, show newcomer Violett Beane will play the role of Jesse Quick, a female heroine speedster. Beane is set to appear in multiple episodes throughout the season, and her character is described as “a brilliant but quirky college student who gets caught up in the battle between The Flash and Zoom.”

Jesse Quick will join the other new speedsters in the showTeddy Sears as Jay Garrick, the first Flash, and Keiynan Lonsdale as Wally West, the Kid Flash.

Barry’s romantic life will also get a little complicated, as an old love interest will be returning for the new season. Actress Malese Jow will reprise her role as the reporter Linda Park, and will appear in multiple episodes.

“Linda Park will return as Iris West’s (Candice Patton) friend and colleague at Central Picture News and her past relationship with Barry will put both Iris and The Flash in unexpected danger,” executive producer Gabrielle Stanton said, via Entertainment Weekly.

Previously, a short teaser trailer teased that season two may have The Flash established as a well-known and trusted hero of Central City. In fact, it was teased that the city may now have an easier way to communicate with their speedster hero whenever his help is needed. Just like how Barry Allen is fast, fast eyes of fans have easily spotted in the 11-second long teaser what looks like the Flash Signal!

The Flash returns to The CW on October 6.

'Attack on Titan' season 2 news: Story to focus on new...