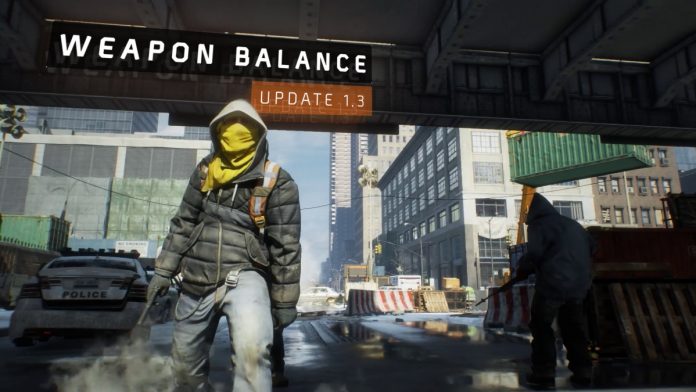 Ubisoft just announced another additional tweak that will feature in upcoming major patch for the online third-person shooter role-playing game “Tom Clancy’s The Division,” with Update 1.3 set to address some problems with the meta with regard to weapon distribution.

As an agent for the Strategic Homeland Division (SHD) activated as part of the second wave response to the Green Poison crisis, having access to a veritable arsenal of lead-spitting implements is part and parcel of the job. Similarly, getting attached to a specific weapon type or playstyle is also part of an online multiplayer game.

According to Ubisoft’s recent blog post, which was made in advance of Update 1.3, a lot of players of “The Division” are getting too attached to some weapon types, specifically the submachine guns (SMGs), Marksman Rifles, and Assault Rifles.

According to statistics, about 30 percent of players use SMGs with about 25 percent each for the two rifle types. That leaves a measly 20 percent of the game’s player base who use either light machineguns (LMGs) or shotguns, which means the game has a major imbalance with regard to its weapons.

Even the SMG itself is suffering from some disparity in the usage of its various weapon types, with about 40 percent of SMG users running with the AUG with another 25 percent using the Vector, accounting for about 65 percent of SMG users for only two of the weapon’s varieties. According to the report, this is most likely due to the weapons’ availability and power; the AUG and Vector are both acquired from blueprints from the Dark Zone, which makes them available in quantities, while both weapons are also the most powerful in the SMG family.

To address the issue, Ubisoft Massive is implementing a number of changes to how the gun families work. Among the new changes is a tweak to the critical hitting feature of the SMG, making them carry a critical hit damage bonus instead of a critical hit chance. The new feature will make reaching a higher critical hit chance more difficult, which might stem some of the appeal of the weapon type.

Meanwhile, the two least loved by players, shotguns and LMGs, will also be receiving changes to their effects. LMGs will not get a bonus to their damage when shooting a target out of cover, meaning the weapon now has more of a crowd control and utility feature. For shotties, the guns will receive a stagger effect against NPC enemies alongside a change that will allow the weapon’s base damage to scale with its level up to a maximum of 30 percent.

Aside from the above, Update 1.3 will also bring a myriad of other changes to the game. No specific release date has been given, but the patch is expected to hit before “The Division: Underground” hits this August.