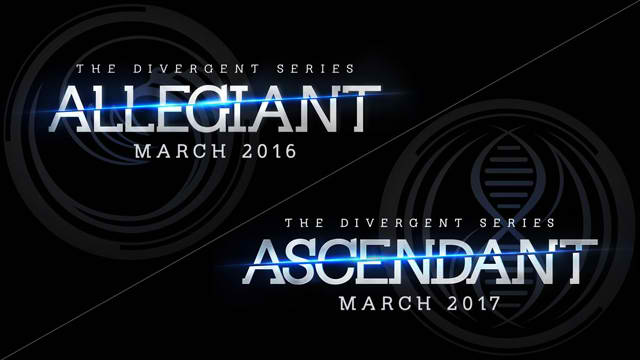 Fans of the popular YA worldwide bestseller series Divergent may have already known and expected that the third and final book in the series, Allegiant, will be split into a two-movie finale (following the recent trend in books to movies adaptation). However, Lionsgate surprised and thrilled a lot of fans when they announced that while the finale will be a two part movie, the final movie received a new titleand opened the doors for a lot of possible expansions to the story far beyond what the books have told.

While both films will still be based on the final book Allegiant, it was revealed that Ascendant will also expand the story in a yet unknown way.

The taglines of the films also hint at what fans can expect for each installment. For Allegiant, Tris and Four will take on the journey to the other side of the wall to see what the rest of the world is. As the tagline said, “Break The Boundaries of Your World”.

The Ascendant tagline, meanwhile, teases a lot of possibility with the tagline “The Ends is Never What You Expect.”

Veronica Roth, author of the Divergent trilogy of worldwide bestsellers, gave her take on the latest name change via Tumblr.

“What does this mean? Well, basically, it means there are going to be some changes, but it’s really too early to know exactly what those changes will be or the extent of them. I know changes always make fans of the books and the author! nervous, but hopefully the characters we know (and love. Or sometimes love to hate?) will still be intact, which is really the important thing. I am eager to see how these movies turn out, along with you guys.”