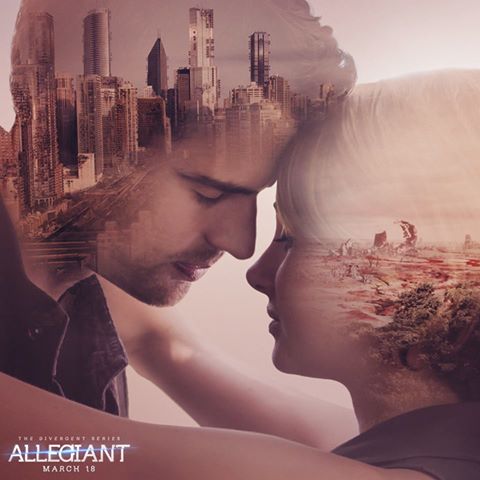 With only a few weeks left before “The Divergent Series: Allegiant” hits the big screens, an array of promotional materials have been release to hype up the fans’ anticipation.

New IMAX poster features lead protagonists Tris (Shailene Woodley) and Four (Theo James) into a world described to be far more dangerous than ever before. The synopsis accompanying it reads, “After the earth-shattering revelations of ‘Insurgent,’ Tris must escape with Four and go beyond the wall enclosing Chicago. For the first time ever, they will leave the only city and family they have ever known.”

“Once outside, old discoveries are quickly rendered meaningless with the revelation of shocking new truths. Tris and Four must quickly decide who they can trust as a ruthless battle ignites beyond the walls of Chicago which threatens all of humanity. In order to survive, Tris will be forced to make impossible choices about courage, allegiance, sacrifice and love,” it continued.

Lionsgate has also unveiled an official clip from the film showing Tris and Four having a romantic sunset moment atop an abandoned building. Titled “Heights,” the footage opens with the two climbing the structure while Tris teases Four saying, “We’re almost there, what are you, afraid of heights?” to which the latter replied with “No, who told you that?”

“Sometimes when I look past the wall, I think that I could see something out there,” Tris shared. When she asked Four if he had the same observation, “No, I don’t. I am looking, I’m just not seeing what you’re seeing,” he answered. He then said, “Are you sure we’re gonna do this?” and Tris quips with, “Yeah.” The video ends with the two sharing a passionate kiss.

“The Divergent Series: Allegiant” is slated to premiere in theatres around the United Kingdom in March 10, to be followed by the United States in March 18.

Meanwhile, following the exit of director Robert Schwentke from the franchise, the studio has tapped Lee Toland Krieger to take over the helm for the final installment “The Divergent Series: Ascendant” scheduled to be released on March 24, 2017.