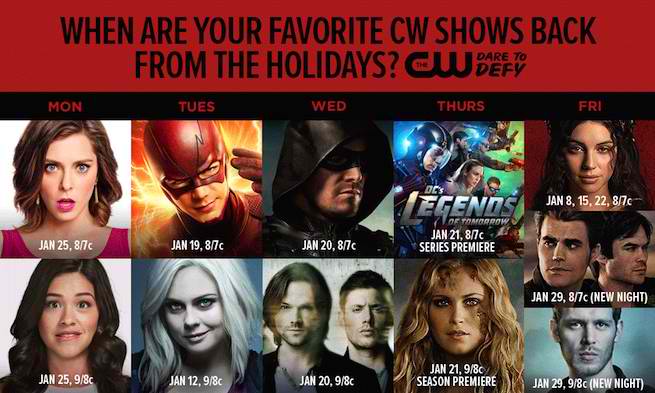 The CWhome of hit comic book shows such as “Arrow,” “The “Flash,” “DC’s Legends of Tomorrow,” and “iZombie”has recently revealed the return schedule for their shows, as the winter mid-season break starts.

One of the most common practices when it comes to American TV shows these days is the split of a full season to two parts, where the show will end the first part of the season with an episode having a huge cliffhanger, and will have fans waiting in agony for a number of weekssometimes even monthsbefore the season continues. Done within the winter season for most shows, the episode talked about is called the midseason finale.

As for The CW, all of their series that went into their respective midseason finales are set to come back with a new episode to continue the rest of their run in January 2016.

First off, the royal series “Reign” will not have its “winter finale” until Jan. 21, 2016. The series comes back with a new episode on Jan. 8 and will officially go on hiatus after its Jan. 22 episode. There is no word of either a cancellation or a renewal. The show’s timeslot will then be taken over by “The Vampire Diaries,” as they go back for the final half of their current season.

The much awaited series premiere of the new spinoff, “DC’s Legends of Tomorrow” will happen on Thursday, Jan. 21. “The 100” also returns on the same day for a new season.

Mondays will once again find both “Crazy Ex-Girlfriend” and “Jane The Virgin” back on Jan. 25. Finally, “The Originals” return on the same day with “The Vampire Diaries” on Jan. 29.

'Fallout 4' Far Harbor DLC to put Children of Atom at...