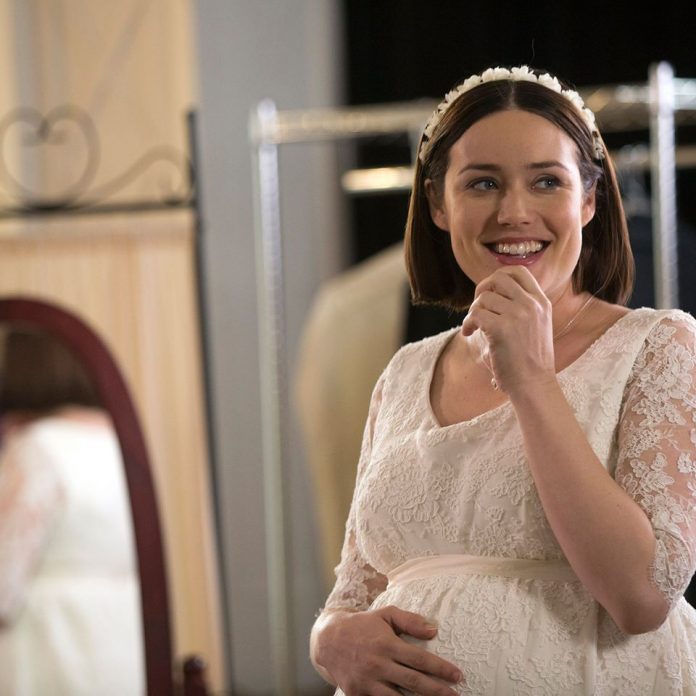 NBC has released promotional photos of Elizabeth Keen (Megan Boone) ahead of her upcoming big day with Tom Keen (Ryan Eggold). However, it remains to be seen if she will push through the ceremony with Raymond “Red” Reddington (James Spader) voicing out his concerns.

According to TV Line, the on-again, off-again couple will try to have their happy ending with a second marriage. However, based on the unveiled images, it seems like the supposedly joyful times have turned into somber one in an instant.

One of the pictures shows Aram Mojtabai (Amir Arison) painting the words “Just Married” on a vintage car. Meanwhile, another features Tom shovelling some dirt near a creek, appearing to bury what could be a person wrapped tightly inside a plastic bag. Several photographs also reveal Donald Ressler (Diego Klattenhoff) on a crime scene, talking to someone while being surrounded by other agents, police force and even an ambulance.

There are speculations that aside from Red’s vocal disapproval of their wedding, there may be an incident that leads Liz and Tom to have a short reunion if it happens at all. It is confirmed that Eggold has formally closed a deal with the network to headline in a currently titled spinoff series of “The Blacklist.”

He is set to to star as the male lead opposite Famke Janssen while the episode scheduled for May 12 will serve as the official backdoor pilot for the potential new show. Their relationship is predicted to have the same dynamics as Liz and Red in the parent series. However, this remains to be seen if it comes to fruition. Aside from the two, Edi Gather and Tawny Cypress will also play supporting roles in the spinoff.

As fans wait for further announcement, they may tune in to the two-parter special of “The Blacklist” titled “Mr. Solomon” and “Mr. Solomon: Conclusion” slated to air on April 7 and April 14 respectively. Both on Thursday nights at 9 P.M. EST.