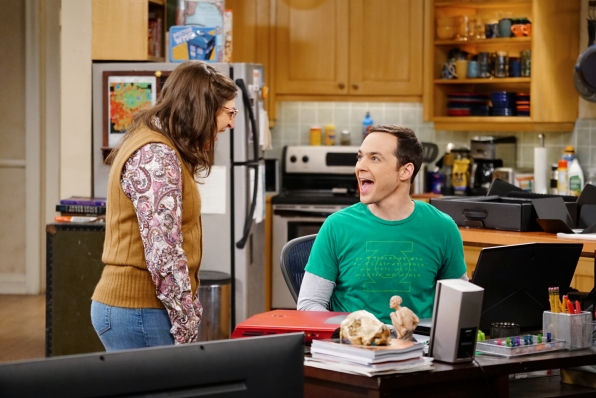 The upcoming brand-new episodes of “The Big Bang Theory” season 9 will have some of the characters’ secrets being revealed in different occasions.

The first one will be during the installment titled “The Solder Excursion Diversion” where Sheldon Cooper (Jim Parson) will reveal something big and embarrassing to Amy (Mayim Bialik) as she helps him get a new laptop. Meanwhile, Raj Koothrappali (Kunal Nayyar) will tell Penny (Kaley Cuoco) and Bernadette (Melissa Rauch) that their respective husbands Leonard (Johnny Galecki) and Wolowitz (Simon Helberg) actually ditched them to attend an early screening of a highly anticipated comic book movie.

Moreover, the second instance will be in the episode titled “The Big Bear Precipitation,” where the gang will be seen going to a weekend getaway. The synopsis reads that Sheldon spills a secret of Leonard’s when the two take a cabin trip with Penny and Amy.

Back in the city, Koothrappali will go overboard with his pregnancy gifts to the expecting couple, Wolowitz and Bernadette. The two will take the mater in their own hands as they draw the line and stop him from giving them more. It remains to be seen if they will be successful in doing so.

Meanwhile, the cast and crew of the show recently attended the PaleyFest where they shared their favorite moments in the series after they hit their landmark 200th episode.

Cuoco revealed that she was hoping for Penny and Leonard to be married since the start, “She has a real job now. She’s married to her best friend. I’ve said from the pilot, it was my dream they would get married.” Galecki stated that even though he loved the wedding, he thinks that it was not the most emotional moment for the pair but rather when they exchanged their “I love yous.” “The first time we said it out loud was really nice,” he stated.

Moroever, Parson humorously revealed that he cannot wait for Sheldon and Amy to go under the covers again, “I look forward to doing it again. I discovered a new way of conversing with an actor on this show that was pillow talk! I can’t wait to be back in bed again.”

Season 9, episode 19 “The Solder Excursion Diversion” will air on March 31, to be followed by episode 20 “The Big Bear Precipitation” on April 7, both on Thursday nights at 8 P.M. EST.

Marvel news:'Spidey #1' preview out; to feature early days of Peter...