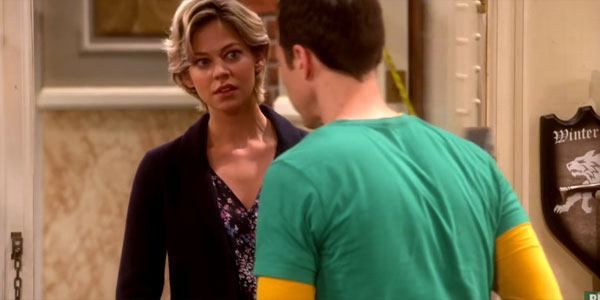 TV series fans may have had to watch a few of their favorite fictional couples undergoing a break up phase and “The Big Bang Theory’s” Sheldon, played by Jim Parsons, and Amy, played by Mayim Bialik, are no exemption.

The quintessential nerdy couple from the hit sitcom “The Big Bang Theory” have been separated since this season’s premiere episode “The Matrimonial Momentum.” And while John Galecki’s Leonard and Kaley Cuoco’s Penny are in wedded bliss, Sheldon and Amy find themselves in a series of fights and disappointments resulting in Amy initiating the split. Sheldon’s insensitivity may have caused the break-up but no one has been suffering in this situation more than him.

In the recent episodes for this season, viewers were casually introduced to Amy’s new love interest, Dave. Prior to seeing Dave in the flesh, fans (as well as Sheldon) are still holding on to a little glimmer of hope that the ex couple will eventually reunite. But as Stephen Merchant finally brings Dave’s character to life, the assumptions and theories for Amy’s and Sheldon’s relationship are being reassessed.

In the upcoming episode of the series titled “The Mystery Date Observation,” Sheldon may finally be moving on with the arrival of a potential new love interest in Vanessa. “America’s Next Top Model” former contestant Analeigh Tipton will be guest starring and playing the new character. Although there is no official information release regarding Vanessa’s arrival, website Cinema Blend reports that it is still up in the air if her character will play a major role in the long run or if it is going to be a one time gig.

Meanwhile, showrunner Steve Molaro has suggested that the team of writers behind “The Big Bang Theory” is still unsure of whether Amy and Sheldon will get back together or live separate lives, keeping fans guessing on how their reunification or permanent separation will affect the over all dynamics of the show.

“The Big Bang Theory” recently went back to its original timeslot and is now airing Thursday nights at 8pm ET on CBS.