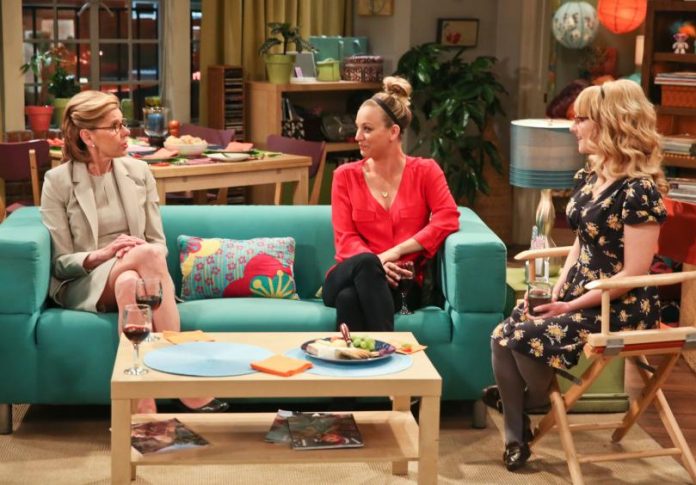 Penny (Kaley Cuoco) is forced to deal with her mother-in-law as Leonard’s (Johnny Galecki) mom suddenly pays them a visit in this week’s “The Big Bang Theory.”

The upcoming episode of the hit comedy sitcom titled “The Line Substitution Solution” will see Leonard’s mom, Beverly (Christine Baranski) dropping by Pasadena for a quick visit. Unfortunately, it seems like it will not be a smooth sailing stop over as Penny will struggle to make a connection with her. It is no secret that Beverly was not very happy with her son’s choice of life partner, and it looks like nothing has changed since Penny and Leonard got married.

Despite the circumstance, spoilers suggest that Penny will make a last-ditch effort to win her mother-in-law’s heart by trying and engage Beverly in a conversation. Unfortunately, she will not be easily budged as she will talk to Sheldon (Jim Parsons) instead, effectively ignoring her son’s wife. To retaliate, Penny will also try to capture Sheldon’s interest by showing some pictures of a beautiful woman.

Speaking of Cuoco, the 30-year-old actor addressed rumors that she is planning to exit the show right after season 9. In an update posted on the actress’s official Instagram account, she published a photo of herself with an edited word stamp that reads “What?!” The series veteran also captioned the photo with, “The look I give when I hear rumours about myself leaving @bigbangtheory_cbs isn’t happening. Never gonna happen. Won’t happen. Here till the end ya’ll.”

Elsewhere in the episode, Sheldon will tap Stuart (Kevin Sussman) to spend the day with Amy (Mayim Bialik) as he will rather go to a movie screening than do something else with his girlfriend.

The official synopsis of the episode published by The Futon Critic reads, “Sheldon hires Stuart to spend the day with Amy when he’d rather go to a movie screening. Also, Leonard’s mother, Beverly, comes to town and Penny struggles to make a connection with her.”

Catch the penultimate episode of “The Big Bang Theory” season 9 on Thursday, May 5, at 8 P.M. EST on CBS.