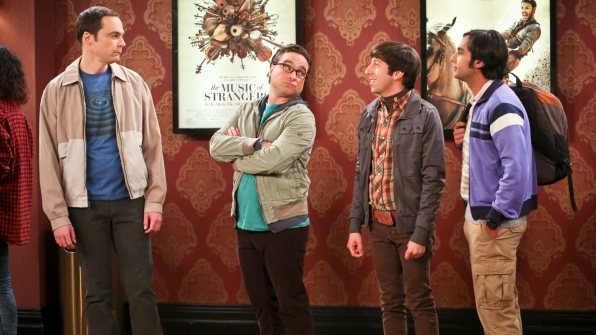 Season 10 of CBS’s critically acclaimed comedy series “The Big Bang Theory” is now in production with the premiere picking up the morning after last installment’s finale.

The stars of the show took to their respective social media accounts to share some behind-the-scenes photos. Kaley Cuoco, who portrays Penny, posted a picture with the rest of the gang with both their hands up signifying their 10th run. “#season10 woot woot! @thebigbangtheory__ we back babyyyyy,” her caption read.

Her on-screen partner Johnny Galecki, who plays Leonard, also posted a similar snap taken using an instant camera. “First live audience taping of Season 10 happening as I post. … Thanks to all the fans (and even the haters) for getting us here. We love you very much,” he wrote.

According to reports, executive producer Steve Molaro teased that episode 1 will feature what happens after Sheldon’s (Jim Parsons) mom Mary (Laurie Metcalf) and Leonard’s dad Alfred (Judd Hirsch) apparently spent the night together. Although it is speculated that the two hooked up and had a romantic rendezvous, it still remains to be seen if it comes to fruition.

Meanwhile, the synopsis unveiled by the network reveals that Penny will pick up her anxiety-ridden mother Susan and drug dealing brother Randall from the airport.

The two arrive in town to witness Penny’s second wedding with Leonard but their time together is expected to become awkward as they travel from the airport to the wedding venue. The newcomers will be portrayed by guest stars Katey Sagal and Jack McBrayer, respectively.

The showrunner also shared that Sagal was actually asked before to appear in the series but plans for her introduction initially did not work out. However, her name kept floating around and when the time came that they wanted to introduce Penny’s mom, the star immediately came to the producers’ minds.

Despite rumors that the upcoming new season may mark the final chapter of the franchise, CBS Entertainment president Glen Geller said at the Television Critics Association summer press tour that he hopes it will not be the case.

“We are very confident that everyone wants ‘Big Bang’ past year 10 and I know Warner Bros. will make those deals,” he stated.

'Iron Man 4' news: Future of the franchise still bleak as...