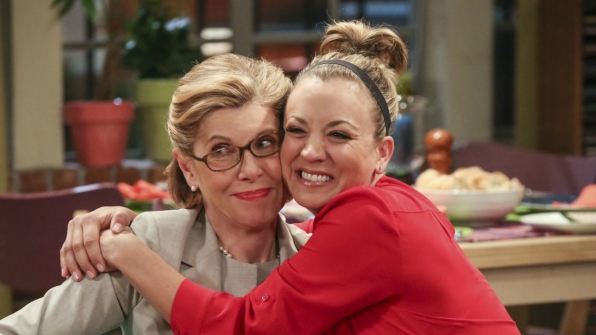 Sure enough, Alfred and Mary’s story ended on a cliffhanger so it is almost good as confirmed that the two will continue to appear in a couple more episodes in season 10. It could be a recurring stint depending on whether the two hit it off with their budding romance. Given this, just how long will Penny’s soon to be introduced mom, Susan (Katey Sagal) and brother, Randall (Jack McBrayer) be staying in Pasadena?

Should Leonard and Penny’s second wedding ceremony push through earlier in the season, it might be safe to say that the two will at least stay for the celebration. Regardless of its length, executive producer Steve Molaro says that their stint will be far from smooth sailing because of their hang-ups with each other

“Penny’s close with her dad,” the writer told Entertainment Weekly‘s Natalie Abrams. “As we know, her brother Randall has been a bit of trouble over the years, selling drugs and being in and out of jail, and that’s put a lot of stress on her mom. You will pick up on the tensions between her mother and her brother very quickly, and you get a glimpse of Penny and her dad being caught in the middle of that.”

Aside from being forced to function with her mom and brother constantly ticking each other, Penny is also speculated to be having some progress in her trying acting career which may be a good thing but the timing can be quite a problem. She has been forthcoming about being unhappy with her current standing as a thespian despite making so much money. Back in June, while attending this year’s San Diego Comic-Con, Molaro admitted that they were still figuring it out how things will pan out for the Nebraska native. “We’re still figuring things out; I think she’s in an interesting and relatable place. She’s going to start to weigh her options,” he explained.

Boruto: Naruto the Movie US release date will be in October;...