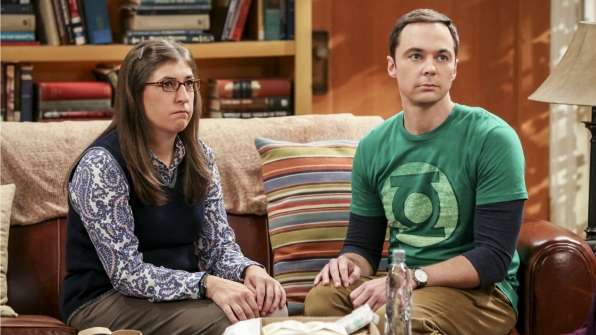 Last week on “The Big Bang Theory,” Sheldon (Jim Parsons) and Amy (Mayim Bialik) hosted a brunch at their place, while Leonard (Johnny Galecki) regaled visitors at a comic book convention with stories of how he got to marry Penny (Kaley Cuoco).

Penny, who has become somewhat famous for her role in “Serial Ape-ist,” was asked to sign autographs at a small comic book convention. Though fans said that her performance was awful, everyone agreed that she is very attractive. When one fan asked Penny for a kiss, Leonard stepped in, and later, he told everyone the story of how he proposed and how he ended up being married to such a beautiful and successful woman. His story gave the guys hope that they too could end up meeting someone just like Penny.

Meanwhile, Sheldon appeared to be adapting well to his and Amy’s new living arrangement as he agreed to host a brunch for their friends. But Sheldon wanted everything to turn out well, so he suggested a test run and invited Stuart (Kevin Sussman), the lady from downstairs, and a guy from his geology lab as their guests. When Stuart learned that they were on the trial team, his feelings were hurt and he decided to leave. But Sheldon was able to save the moment, and they all ended up sharing a pitcher of mimosas.

This week, in the episode titled “The Veracity Elasticity,” Amy decides to lie to Sheldon about repairs being made to her apartment so she can continue living with him. Later, the two host an “on location” episode of “Fun with Flags” in Penny’s apartment.

Elsewhere in the episode, Leonard lets Penny decorate Sheldon’s old room after he learns that she has been secretly moving Leonard’s collectibles into storage.

In the promo for the episode, Sheldon asks Leonard something in gibberish, and Amy asks him why he’s speaking Klingon.

“Why are you speaking English?” Sheldon retorts.

Later, it appears that Sheldon learns that Amy has been keeping something from him as he tells Leonard, “Why would she keep something from me? I shared my body with that woman.”

'The Winds of Winter' release date rumored for this month?