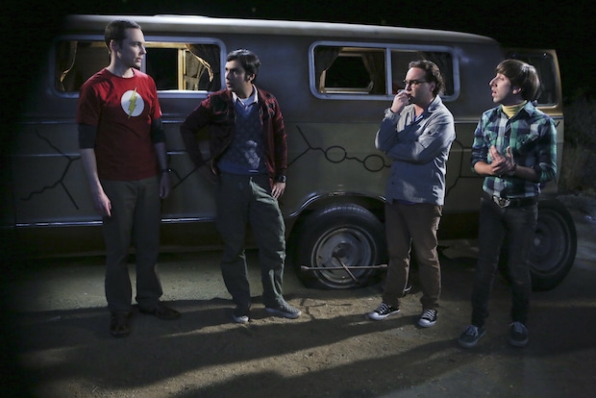 Are the guys of “The Big Bang Theory” about to meet one of their favorite superheroes in season 10? Fans of the show are aware that Leonard (Johnny Galecki), Sheldon (Jim Parsons), Raj (Kunal Nayyar) and Howard (Simon Helberg) are fans of DC comic book superheroes, as seen in season 1 wherein they all dressed up as The Flash for Halloween. But it looks like they’ll get to meet their favorite speedster when the show returns as Mayim Bialik (Amy) took to social media to tease details about a guest star.

Bialik took to Twitter on Tuesday, Aug. 23, to post a picture of her and actor Brandon Jones. The shot was captioned, “Thanks for your ‘flash’y guest spot @brandonwjones!” The same photo was posted on the actress’ Instagram account, and Bialik wrote, “He’s sweet, he’s southern and he feels comfortable in latex. Brandon Jones, we had fun having you guest star this week!”

Jones previously starred in “Pretty Little Liars” as Andrew Campbell. His other credits include roles in “The Fosters” and “Unbreakable Kimmy Schmidt.”

It remains to be seen how the four guys will react to Jones’ character, as they tend to have different reactions when faced with their heroes. It can be recalled that upon meeting “Batman” star Adam West, Leonard, Howard and Raj persuaded him to attend Sheldon’s birthday party as part of their surprise for him. While everything appeared to go well with the “Batman” star, their initial encounter with “Star Trek” actor Will Wheaton was less successful as Sheldon considered him to be an enemy of his before eventually making peace with him.

Apart from Jones, the new season will also feature “Breaking Bad” star Dean Norris as Captain Williams, a tough Air Force representative who’s interested in Howard and Raj’s quantum gyroscope for military applications. In last season’s finale, Howard suspected that the government was watching their every move due to the nature of their invention.

“That storyline is certainly not finished,” said executive producer Steve Molaro to Entertainment Weekly. “They have no choice but to see what the Air Force wants and then go from there.”

'Resident Evil 7' release date: There may be new announcements for...