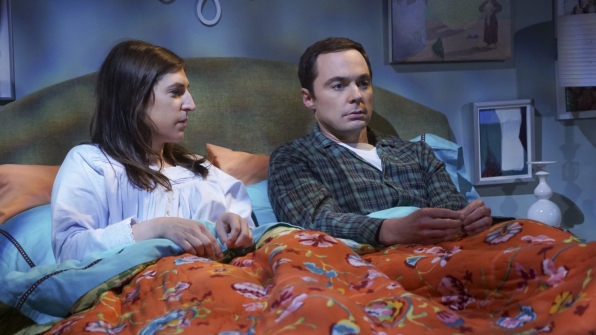 Following an interesting couple of weeks full of ups and downs, the socially awkward couple are already starting to get used to the thought of living under one roof, especially with their attempt to host a brunch last week. The event was not exactly as smooth sailing as one would hope, but it was not a complete disaster either. Unfortunately, this week, the ever-curious Sheldon will start asking questions about the repairs that are supposedly being done in Amy’s apartment. The situation becomes more complicated with the Hofstadters involved.

In a sneak peek for the episode titled “The Veracity Elasticity,” the theoretical physicist is talking to his best friend Leonard (Johnny Galecki) about their respective ladies lying to them. It is insinuated that somehow Leonard let it slip that the construction in Amy’s flat has been finished. With perfect timing, Amy and Penny (Kaley Cuoco) enter and Sheldon wastes no time questioning his girlfriend. After a couple rounds of denying and pressing, Amy eventually comes clean and says that her apartment has, in fact, been fixed for two weeks now.

As it turns out, Penny and Leonard are also having issues of their own with the former sneakily getting rid of the latter’s stuff. Spoilers suggest that Leonard, upon learning about this, will let his wife decorate Sheldon’s old room in their apartment.

Meanwhile, “The Big Bang Theory” season 10 seems to be running smoothly so far with the seventh episode of the season airing tonight. However, the continued mystery of whether the CBS sitcom will retire or go at it again for another year still remains. More recently, mainstay Kunal Nayyar expressed his eagerness to continue doing the show for as long as he can.

“As an artist that is a difficult thing to do as obviously you want to keep things fresh and you want to have the ability to explore other characters,” the British-born actor who plays Raj admitted to the New York Daily News. “But as a human being, being on the show is the happiest place in the world. So if this were the rest of my life, and if I could make a living as an actor being surrounded by such talented and wonderful people and co-workers who are more than but are family, then absolutely yes.”

It can be remembered that a couple of months back, it was also Nayyar who was very forthcoming about the possibility of “The Big Bang Theory” ending after 10 seasons.

So far, those who are involved in the show have nothing but positive responses when asked if they are willing to come back for season 11. Nevertheless, the business side of things cannot be ignored should the renewal of contracts happen. It is important to note that most of the cast members have topped Forbes’ list of highest-paid TV actors and actresses this year, so it’s safe to assume that salaries will be a huge factor in deciding the fate of the beloved series.