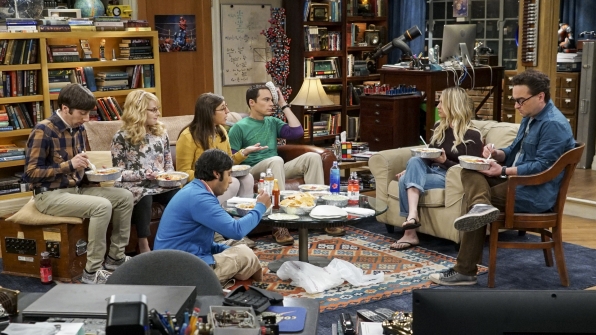 CBS’ critically acclaimed comedy series “The Big Bang Theory” is currently on hiatus in observance of Thanksgiving. When it returns to the small screen, fans will see some of the couples trying to divide the furniture for their respective apartments.

Titled “The Property Division Collision,” episode 10 will have Sheldon (Jim Parsons) and Amy (Mayim Bialik) against Penny (Kaley Cuoco) and Leonard (Johnny Galecki). According to spoilers, Amy will offer a painting to Penny which has their faces on it. However, Penny will not like the present as she was making a strange face when she was drawn.

Meanwhile, Leonard and Sheldon will be fighting over which things they may keep in each other’s apartment. It turns out that Sheldon wants Leonard to have the small avocado planted in a glass while he gets the big sword hanging next to the door. The latter will not be happy with the former’s suggestion as he believes Sheldon wants to have the best stuff for himself. As a form of retaliation, Sheldon will rent out their apartment for $1 a night to random strangers.

Elsewhere, Howard (Simon Helberg) will get annoyed when Stuart (Kevin Sussman) and Raj (Kunal Nayyar) attempt to put themselves back in his and Bernadette’s (Melissa Rauch) life.

Stuart offers the couple a book of coupons to help them with some tasks for their upcoming baby. Bernadette then realizes that one of the coupons is written on the back of an eviction notice. When confronted, Stuart admits that he has no place to go and asks them if he could stay for a little while.

Later in the episode, Raj barges into the Wolowitz’s place during dinner. Surprised to find out that Stuart is there, the two will have an argument about who among them will be the best third wheel in taking care of the baby. Their fight escalates and Raj decides to leave the room.

Before the installment ends, Raj realizes that he may have overreacted and returns to apologize. However, the night turns more eventful when Bernadette suddenly cries out that her water broke, creating a panic among the room. With Howard lost in the situation, Stuart gets the bag while Raj prepares the car to the hospital.