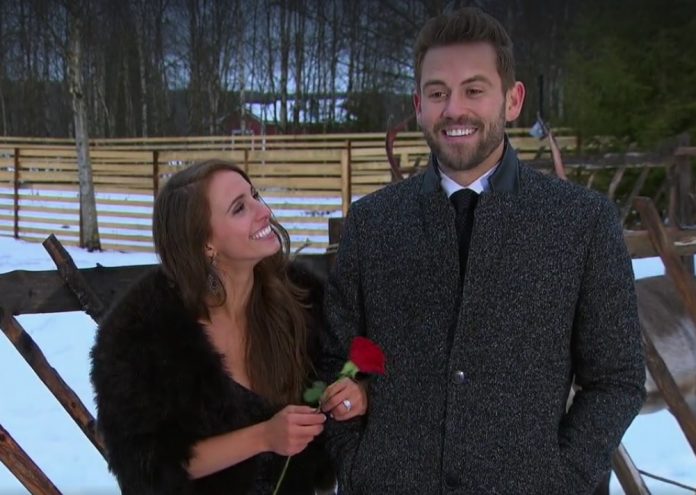 And she said “Yes.” In the season finale episode of “The Bachelor,” the leading man, Nick Viall, has come to realize that he is ready to settle down, and he chose Vanessa Grimaldi to be her bride.

In that romantically charged episode of the dating show, Viall asked the Canadian native if she will marry him, in which the latter happily answered.

“When I look at you, all I see is my future,” said the teary-eyed Viall while holding Vanessa’s hands in the earlier part of the episode.

Before the Milwaukee, Wisconsin native went down on his knee, 29-year-old Vanessa shared her promises to the gentleman. She promised to remind Viall each day about how he made her happy, and she would be willing to do a lot of listening.

In a recent interview with People, the newly-engaged couple recollected the proposal day.

“While I certainly had my fears, I still followed my heart and put myself at risk,” Viall described his emotions that day. He added that the engagement was a “very emotional roller coaster” for him, but he was glad he did.

“Once I saw Vanessa, I kind of calmed my nerves. It was a calming feeling of knowing I made the right decision. It was all worth it!” he said.

Viall, 36, first appeared on the tenth season of “The Bachelorette,” wherein Andi Dorfman is the leading lady. He came in second place, and it was a total heartbreak for him. The University of Wisconsin alum already had his engagement ring in his pocket, only to be sent home by Dorfman.

The lady attorney chose Josh Murray at that time, but, the couple eventually called off their engagement in January 2015.

As for Viall, the heartache was all worth it since he finally found the love of his life with Vanessa, a special education teacher.

“All the tears and all the ups and downs, it kind of just felt like, finally I got to the place that I hoped to get to,” said the reality star.