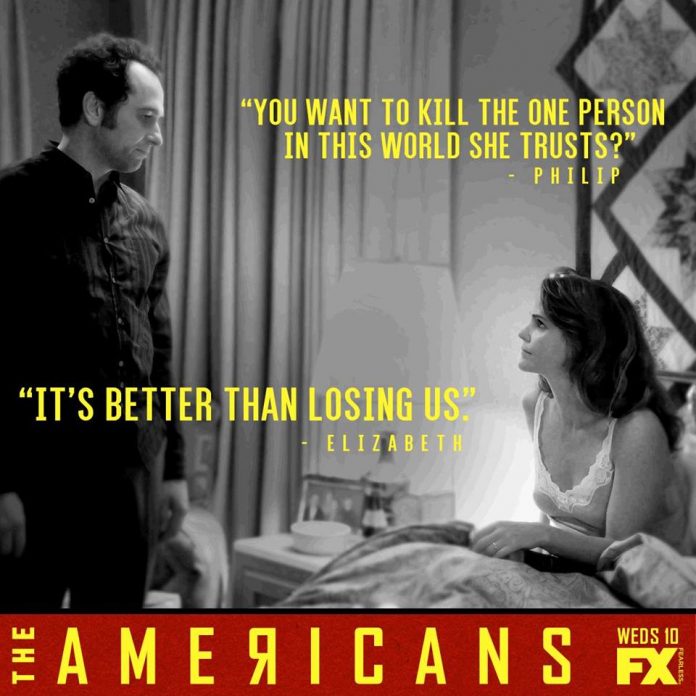 Viewers will see more of the characters’ struggles in maintaining their internal family dynamics in the all new episodes of FX’s hit spy drama series “The Americans” season 4.

In the third installment titled “Experimental Prototype City of Tomorrow,” Philip (Matthew Rhys) and Elizabeth Jennings (Keri Russell) will struggle to contain their cover without destroying their daughter. On the other hand, Paige (Holly Taylor) will try her best to cope with the new burdens she will experience as she protects her family’s secret.

Gabriel (Frank Lagella) is also deemed to more likely have found a way to handle the Glanders pathogen as he stands up for his promises.

Meanwhile, in the fourth episode dubbed “Chloramphenicol,” Philip and Elizabeth will go on a mission alongside William (Dylan Baker) and Gabriel. They will encounter a devastating flaw which forces them to confront the depths of their patriotism as well as their morality.

At the same time, Nina Krilova (Annet Mahendru) may put her life on the line as she strives to become a better person.

In an interview with Variety, co-showrunner Joel Fields teased that when it comes to adding Baker to the cast, “I’ll just say he’ll be an important part of the season. There’s some other great additions too, (including) Ruthie Ann Miles, who will show up in the third episode to play a target of Elizabeth’s in an ongoing relationship.”

Talking about the direction of the new season, Fields revealed, “We’ve talked about the shape of the end of this story, and we have a lot of ideas. Our process is that we simultaneously know a lot of things and remain open to the fact that we’ll discover things along the way.”

“I think it’s safe to say that if there’s a three-act story structure to this big story that we’re telling, this season is the end of the second act,” he hinted.

Some of the fans believe that the show keeps getting better, with the premiere episode garnering double number of viewers from the previous 1.11 million to 2.13 million.

Homeland season 5: Four new characters to be introduced; Carrie will...