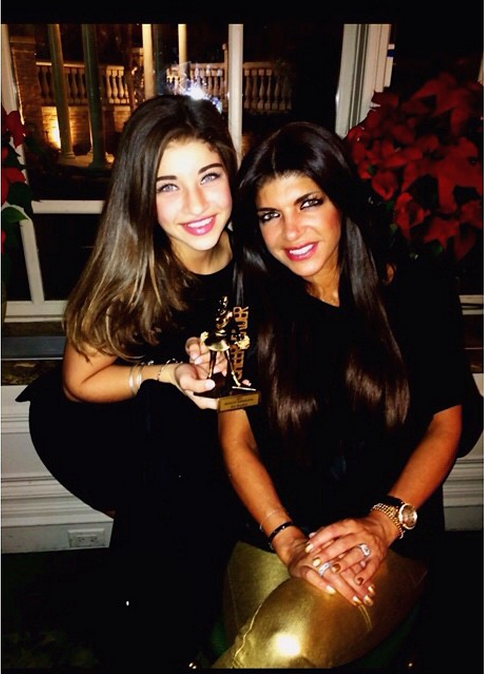 When reality star Teresa Giudice entered the Connecticut detention center last January, she left behind her family. Now that her 15-month prison sentence is almost over, “The Real Housewives of New Jersey: Teresa Checks In” will show how much jail time has affected her life.

According to People, one of the episodes of the upcoming three-episode special that will air on Bravo will feature Teresa and her eldest daughter Gia. In the sneak peek, the mother calls her daughter and asks, “Is your makeup on?” In return, Gia starts to sob.

A separate clip shows the 14-year-old saying, “My mom doesn’t want me or anyone to get emotional, so I try my best just to keep it all together.”

In the same report, the statement of Giudice’s lawyer, James L. Leonard Jr. earlier this year is included. “Several months back we were able to secure an early release date of Dec. 23. That means Teresa will leave the prison on Dec. 23 and go home and sleep in her own bed. Two days later she will wake up and celebrate Christmas with Joe and her girls.”

Meanwhile, The Inquisitr reported that even though there is a chance that the “Real Housewives” star might go to a halfway house after being released from the detention facility, this will not be the case. A source said that this is because a halfway house is often reserved for those who have spent more time in prison. “Individuals that go to a halfway house need assistance and to be monitored as they transition back into society. Teresa wasn’t sent away long enough for that to be an issue,” the source added.

Once Teresa is back at home, it is said that she will be giving a post prison interview which will cost a lot. As for how much it will be, Andy Cohen, host of Bravo’s “Watch What Happens: Live,” said that money was never discussed.

Teresa and Joe Giudice pleaded guilty to bankruptcy fraud and conspiracy to commit wire and mail fraud in March 2014.