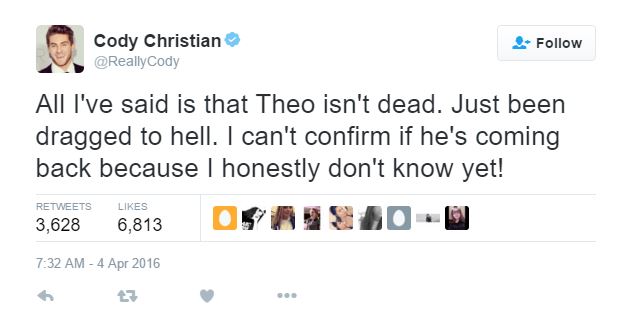 The previous season of “Teen Wolf” showed Theo Raeken (Cody Christian) being dragged to hell by his departed sister who wants revenge. With this, fans assume that he is already dead. However, there are still possibilities that he will come back in the upcoming season of the teen drama and horror fiction television series.

During the Oz Comic Con in Perth Australia, one of the fans asked the actor if he is really dead. Christian replied, “I’m not dead, no. Keep watching,” reported International Business Times UK.

Nonetheless, the actor quickly corrected the information through his Twitter account. He said, “All I’ve said is that Theo isn’t dead. Just been dragged to hell. I can’t confirm if he’s coming back because I honestly don’t know yet!”

Christian wanted to ensure that fans will not be given false expectations should the show decide to continue without his character. He also promised that he will share the information as soon as he gets the confirmation, the actor said in a follow up post on the same social media page.

Fans of the actor are already expressing their desire to see the return of Theo Raeken on screen. There are a few, however, who hope he does not, as the character also caused some troubles in the show.

As for the general theme of the upcoming season, Jeff Davis, executive producer of the television show said in an interview with TV Guide that they have a clear direction for season 6. He explained that the second half of season 5 focused on monsters, while season 6 will center on ghosts.

No exact date has been announced for the premiere of “Teen Wolf” season 6, but it is anticipated to air around June.

'Star Wars Rebels' season 3 spoilers: the future of Ezra and...

The Voice Season 9: Selena Gomez, Rihanna, Missy Elliot are next...