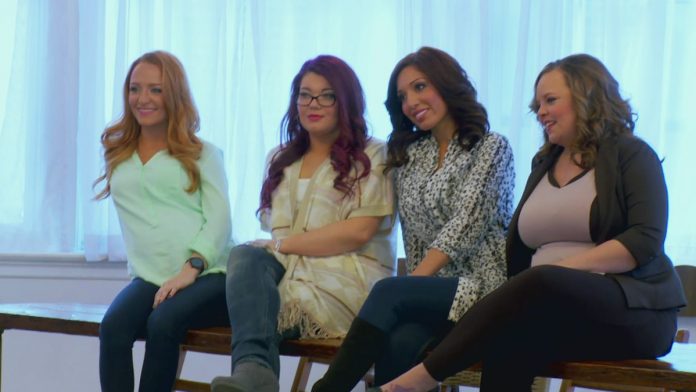 The episode hosted by Dr. Drew Pinsky started with Catelynn and her newborn daughter, Novalee Reign, who were accompanied by Catelyn’s fianc Tyler Baltierra.

Catelynn discussed her breastfeeding and when asked by the host about what the most difficult thing is about raising Nova, the young mom answered: “I remember bringing Nova home, and you think about all the stuff that you miss with Carly and I wouldn’t have it any other way but just raising this one and just seeing her and witnessing things that she does, it just really makes you think about all the stuff that you’ve missed,” Carly is Catelyn’s first daughter who was adopted by Teresa six years ago.

According to a report by Hollywood Life, the reunion became emotional when Teresa came out on stage. She recalled the time when she first adopted Carly where she tried to be happy that she had a daughter but at the same time, she could not get over thinking how horrible Catelynn must feel about letting go of her daughter. When Teresa was introduced to Nova, they immediately hit it off.

When it was Farrah’s turn, Dr. Drew interviewed her mother regarding their daughter’s participation in making adult movies. Mom Debra went on to defend Farrah against those who criticize her, stating that she wants other women to help single moms, US Magazine reported.

Dr. Drew called in Catelynn, Amber Portwood and Maci Bookout on the stage afterwards, as he mentioned that he wants to bring the four moms’ bonds back together.

MTV reported that that the focus returned to Maci and Farrah as the former apologized.

“I really, honestly never meant to hurt your feelings. It was never my goal, or for you to feel judged by me. We all know how alone we can feel in our situations, and I think it’s important to know that we always have the four of us. I will always have their back because they’re the only three that know exactly what we’ve all been through,” Maci said.