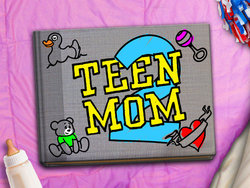 This season, there is more drama to be expected after Teen Mom 2 aired out its full trailer, according to a report by the US Magazine. It will still star Jenelle Evans, Leah Messer, Chelsea Houska, and Kailyn Lowry who hailed from their initial fame at “16 and pregnant.” Since then, the team of four had a solid following of fans and they will experience a lot of drama this coming season.

But the talk of the town of the four is Jenelle Evans. On the trailer, she was called “trailer trash” and Griffith was seen last being hauled away by a police car . She was spotted without her engagement ring, has split up with Nathan since March, and joined Tinder, according to the Inquisitr. This ringless scenario came a week after she was reported to have been detained at the police station for assault charges against ex-fiancee Nathan. Griffith claims on his Twitter account that he was choked and physically attacked by Evans. The police report, which was shared on Twitter, reflected his injuries. Apart from her problems with now ex-fiance Nathan, she still has issues with her mother Barbara over custody of her child Jace, according to a report by UPI.

The trailer’s emotional scenes demonstrates a very painful season for everyone else in the show. In it, Kailyn Lowry was crying because her ex’s girlfriend Jo Rivera has a bun in the oven and she has even bigger marital problems with her husband Javi Marroquin . In fact, International Business Times reports that they might be on the verge of a divorce.

Despite Lowry’s marital problems, she is definitely having the time of her life with her adorable child, five-year-old Isaac. Isaac requested for another baby boy from her and she posted a video of Isaac saying “Another baby boy, please?” on her Instagram account. As of the time of this posting, the video has garnered 37,000 likes from her fans reports In Touch Weekly. Aside from Isaac, she also has her 18-month-old son Lincoln with Javi her husband. On top of her roles as mother and wife, she is running a business, finishing college, and doing workouts at the gym, reports In Touch Weekly.

Meanwhile, Leah Messer has problems with ex-boyfriend Cory Simms’ intent fight to win back custody of Ali and Aleeah, their twin daughters. Messer’s marriage with Jeremy Calvert is also on the rocks like Lowry’s. She still has a lot of explaining to do regarding rumors of her being an “unfit mother and abusing drugs” as shown on the trailer.

It seems like Chelsea Houska has the least trouble among the four. But her ex-boyfriend Adam Lind seeks joint custody for Aubree, their daughter. And she is being taken back to court for that.

Teen Mom 2 will be airing its first episode this coming Thursday, July 9 at 10 in the evening.