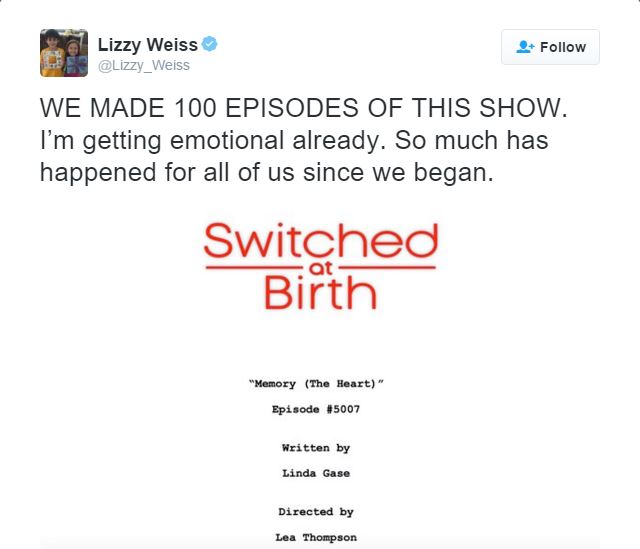 In just a month, “Switched at Birth” season 5 will return to the small screen, but as fans anticipate its premiere, executive producer Lizzy Weiss continues to update them with the progress of the show. To date, there are already seven episodes titled for the season, marking its 100<sup>th episode in the entire series.

On her Twitter account, Weiss said, “WE MADE 100 EPISODES OF THIS SHOW. I’m getting emotional already. So much has happened for all of us since we began.”

Fans expressed their happiness and pride in the show’s milestone, with some also stating their excitement for the premiere of the new season.

Episode 7 of the show is titled “Memory (The Heart)” but no concrete details have been revealed regarding the episode. On the other hand, episode 6 is called “Four Stages in Life,” where “The Vampire Diaries” actress Tristin Mays will debut in an “unexpected role.”

According to an exclusive report of TVLine, Mays, who played the role of Sarah Nelson, the late offspring of Salvatore in “The Vampire Diaries,” will initially appear in episode 6 of the show as a college student named Ally. Her character will unexpectedly have ties with the families of Kennish and Vasquez.

No details have been revealed as to how many episodes will Mays play in “Switched at Birth” season 5, but, her character will further intensify the drama and storyline of the television series.

Meanwhile, the titles of the first five episodes have also been revealed previously. Episode 5 is titled “Occupy Truth,” which will tackle campus racism, particularly the discrimination that the African-American group feels. On the other hand, episodes 1 to 4 are “The Call,” “This Has to Do with Me,” “Surprise” and “Relation of Lines and Colors,” respectively.

Half Life 3 update: mysterious codes pointing to next installment included...