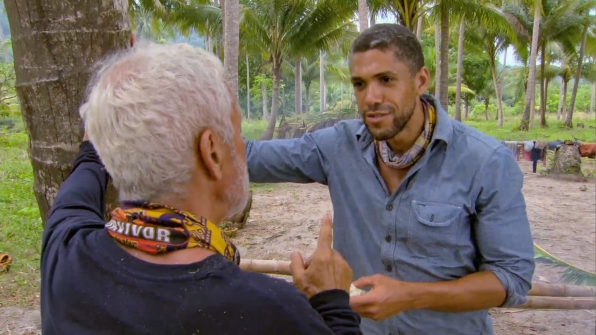 Viewers will see some reshuffling of tribes in the brand-new episode of season 32 of CBS’ hit reality competition series “Survivor: Kaoh Rong.”

After this week’s classic challenge that had a hearty food reward up for grabs, the contestants will experience some changes in the next installment titled “It’s Merge Time.” The synopsis reads, “A Tribe merge reshuffles the game and its alliances. Also, a brutal individual immunity challenge keeps castaways on their toes.”

Viewers saw that the last person to be sent home was Peter Baggenstos from the Brains Tribe. Talking to SheKnows, he revealed that he only realized now that it was Bracco’s vote that essentially eliminated him from the competition.

“She wrote down the word Pete, which Joe always called me. She knew that. When I left, she knew I would get mad at Joe and not her,” he explained. “She knew exactly what she was doing, but it didn’t really matter. The vote was out there. It wasn’t a surprise, because my best shot was a split vote and picking rocks. I don’t like to leave my fate to picking a rock, I’d rather just get voted out. I really took it hard,” he elaborated.

When asked about his thoughts when his fellow castaways labelled him arrogant, “For them to portray me as a clueless, arrogant, condescending person, it was hurtful. That’s not me. It’s the first time in my life I went to my family and was like, ‘Guys, am I really like that?’ They thankfully with open arms said, ‘No, but you do say douchebag things. The core of you, you’re not like an a**,” he admitted.

Following the episode and the contenders’ reason for voting him out, the emergency doctor said that it was “defaming” as a physician when patients see him to learn what others say about him. “They can say I’m arrogant, but they need to back it up with frickin’ data. It’s one thing to say it, and it’s another thing to actually prove it,” he added.

'Grey's Anatomy' season 13 spoilers: Amelia believes she is pregnant in...